In the identity politics game, Christians are the losers. What. A. Shocker.

Here is the description of the event:

How do Christians in the USA experience life in an easier way than non-Christians? Even with the separation of Church and State, are there places where Christians have built-in advantages over non-Christians? How do we celebrate Christian identities and acknowledge that Christians receive unmerited perks from institutions and systems all across our country? Let’s reflect upon ways we can live up to our personal and national values that make room for all religious and secular identities on an equal playing field.  All are welcome!

Sit down, son. Lemme edumacate ya.

In January, Newsweek had this headline: 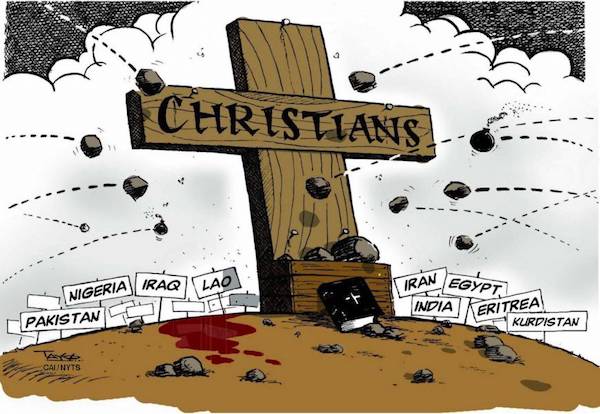 The critics will say that they’re not talking about Christians worldwide, only here, in North America.

Admittedly, Christians living in North America don’t face persecution that Christians in other places of the world face.

But then, just living in North America is a privilege. Western countries have more freedoms than the rest of the world.

Getting back to the topic at hand, it’s totally awesome to be a Christian here where you’re constantly labeled a bigot and a homophobe.

Not to mention your freedom to have your business shut down or to be taken to the Supreme Court for refusing to pour hours of artistic talent into the centerpiece for a ceremony that you believe is against your faith.

And let’s not forget the education system that deals so kindly with Christianity that there are special prayer rooms set aside for — oh, wait. That’s not for Christians.

If you do dare to pray with students if you’re a teacher, you could very well find yourself in court.

And we all know how Christian-friendly the ‘sex, drugs, and Marxism’ culture of college campuses are these days, amirite?

Just because you’re in North America it doesn’t mean that you don’t face some persecution.

Someone said to me this week that Christians were not persecuted in our country. This morning we woke up to this. pic.twitter.com/abt64oO0Ql