In January, when speculation about Korea centered around nuclear armageddon who would have guessed this day would come?

Of course, we trot out all the usual caveats, not sure how much of what Kim Jong Un is saying can be truly believed, Naturally, that’s a given.

But in the sixty-five years since the war (sort of) ended this is the closest we have EVER come to seeing a resolution of the conflict.

After a furious year of missile launches and Nuclear testing, a historic meeting between North and South Korea is now taking place. Good things are happening, but only time will tell!

Nobody even suspected there’d be a secret Easter-weekend meeting between Kim Jong Un and Mike Pompeo. But here are the photos.

Great to have Secretary Pompeo confirmed. He will do an excellent job helping @POTUS lead our efforts to denuclearize the Korean Peninsula. (photos from previously confirmed Easter weekend trip) pic.twitter.com/o4RNDKVmah

Less than a month later, we’re looking at video of the historic moment, courtesy of the Associated Press: 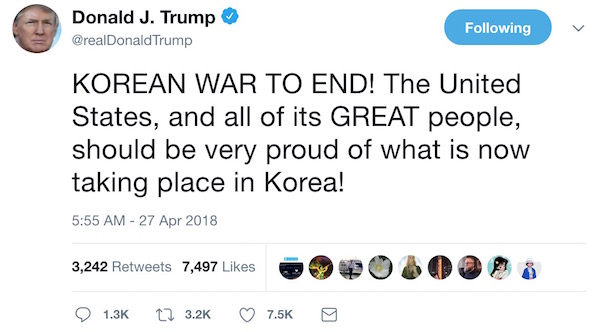 Both leaders vowed to end the Korean War, and committed to the denuclearization of the Peninsula. 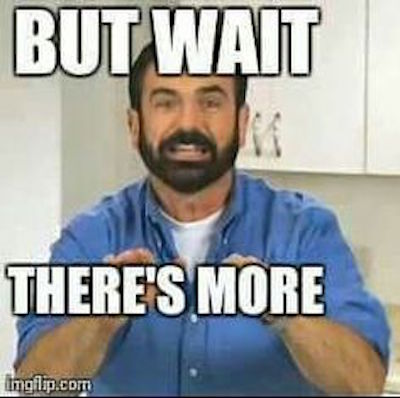 They were also talking about the reunification of families separated by the war.

For context, this unresolved ending to the Korean conflict has been at a stalemate since President Trump was 7 years old.

Now, 65 years later? It might be finally coming to a close.

And it was not long after Trump had gotten neighboring nations — especially China — on board with that Maximum Pressure strategy.  Trump gives credit where it’s due, there as well:

Please do not forget the great help that my good friend, President Xi of China, has given to the United States, particularly at the Border of North Korea. Without him it would have been a much longer, tougher, process!

Contrast that to the Liberal attitude just a couple of weeks ago.

“We have gotten to a point in the world now where we have to rely on the sanity of Kim Jong Un and Putin over the president of the United States,” Behar said when discussing recent tweets sent by Trump that threatened military action against Syria. – Joy Behar

Now we’ve got a handshake, and progress toward Korean detente.

Critics paint him as a dangerous madman. Trump says he’s a ‘stable genius’.

Looking at his results so far, who would you believe?