Special thanks to the perpetually offended for turning an attempted nice gesture into a public flogging.

A gay bar was hosting an event where they were welcoming LBGT members of the police force. They had some flag poles, so it seemed like a good idea to fly a flag that would signify their honored guests along with the rainbow flag and Old Glory.

That turned out to be a mistake. Not because the flag itself is a problem. Until recently, it wasn’t a problem. 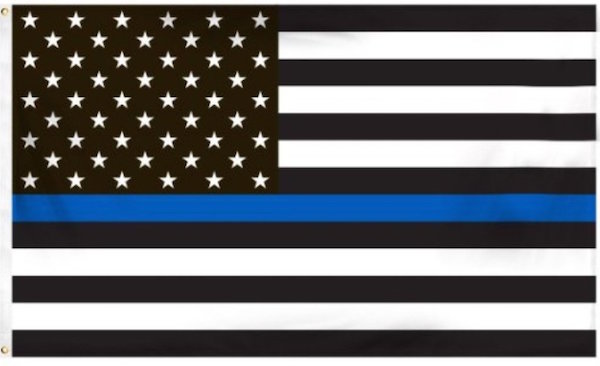 Meaning of the Thin Blue Line Flag: The Blue represents the officer and the courage they find deep inside when faced with insurmountable odds. The Black background was designed as a constant reminder of our fallen brother and sister officers.

Is it a political statement? Hardly.

The thin blue line flag is not officially affiliated with any particular group or political movement — and simply appears to be an emblem of generic support for law enforcement.

In the apology, management called the flying of the flag unintentionally “tone deaf” and “offensive.”

What was the problem? It’s the same-old, same-old.

Nellie's Sports Bar is cancelled.In the wake of the murder of Stephon Clark and non indictment of the officers who…

Some people believe that saying ANYTHING nice about police, ever is somehow evidence of hatred towards blacks.

That is truly a tragic position to take, considering the number of black officers — male and female — who have worn that uniform with distinction, and in some cases, like Miosotis Familia, have laid down their lives while wearing that uniform.

This weekend, all of us at Nellie’s learned an extremely important lesson.

At the end of this week, a group of LGBT police officers were meeting at Nellie’s to gather in a welcoming space. This happened to fall just as we were taking down our Irish flag for St. Patrick’s Day, and we opted to welcome them with what we thought was just a flag representing the police.

Soon after the flag was hoisted, we learned from our customers and the community that this flag is also used to undermine the work of the Black Lives Matter movement, and we promptly removed it. We in no way meant to state that we are opposed to the Black Lives Matter movement, especially in the wake of Stephon Clark’s tragic death and the disturbing new facts coming to light in the Alton Sterling case.

We now understand that flying this flag — at this point in time, in particular — was at best tone deaf, and at worst offensive. We sincerely apologize to our customers and our neighbors for this egregious mistake, and want to assure you that this flag will never fly at Nellie’s again. What it represents to you is not what we want to represent, or what we want our bar to be.

We messed up. There is no excuse. We will learn from this and try harder to make Nellie’s the safe, welcoming space for all that we want it to be. Thank you for teaching us this important lesson. We want to make this better — so we will be sending a donation to No Justice No Pride, and recommitting ourselves to learning more every day.

The fact that a few radicals with a hate on for cops can bully people into pulling such a simple, generic show of support for the police is just sad.

If any group would want a strong relationship with the police, you’d think it was the LGBT community. Especially, if these stats are reliable:

Domestic abuse in the lesbian, bisexual, gay and transgender community is a serious issue. About 25% of LGBT people suffer through violent or threatening relationships with partners or ex-partners which is about the same rates as in as domestic abuse against heterosexual women. As in opposite-gendered couples, the problem is underreported. Those involved in same-gender abuse are often afraid of revealing their sexual orientation or the nature of their relationship.

But some people would rather bully into silence anyone they disagree with.

Not really so tolerant, is it?