Isn’t it great that they’re teaching ‘tolerance’ and ‘diversity’ at school?

It’s just not so much tolerance for different perspectives or diversity of ideology.

Thomas Sowell, a great thinker wrote A Conflict of Visions in 1987. It is arguably the greatest work on the ideological gulf between the left and the right of the political spectrum that is accessible to the common man.

Watch the two fundamental visions explained here at the 1:25 mark:

That book is seriously life-changing.

Public schools only show one vision of human nature.

The latest target is President Trump.

A new AP History textbook, “By The People,” by James W. Fraser, is used in high schools for Advanced Placement courses for grades 9-12, according to the publisher’s website.

In case you didn’t think there was an effort going on in public schools to indoctrinate kids with an anti-conservative agenda, a friend of mine took pictures and highlighted parts of this AP US History book. pic.twitter.com/rj2AN3MIqI

From the textbook (Emphasis added):

Trump’s supporters saw the vote as a victory for the people who, like themselves, had been forgotten in a fast-changing America–a mostly older, often rural or suburban, and overwhelmingly white group. Clinton’s supporters feared that the election had been determined by people who were afraid of a rapidly developing ethnic diversity of the country, discomfort with their candidate’s gender, and nostalgia for an earlier time in the nation’s history. They also worried about the mental instability of the president-elect and the anger that he and his supporters brought to the nation. 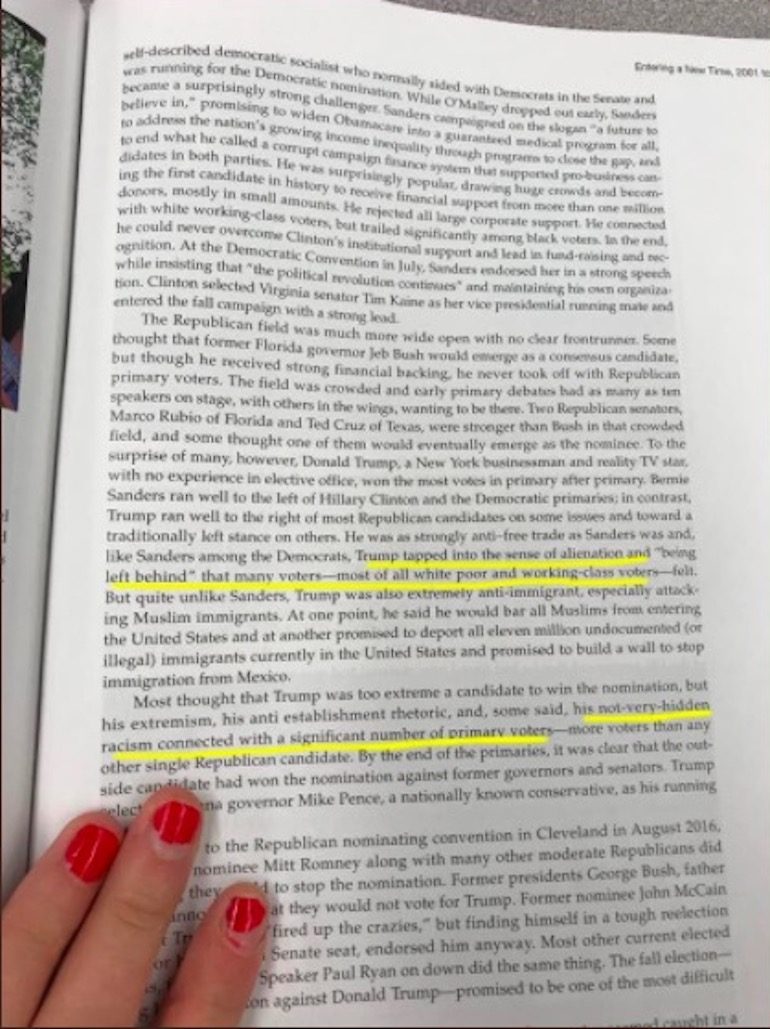 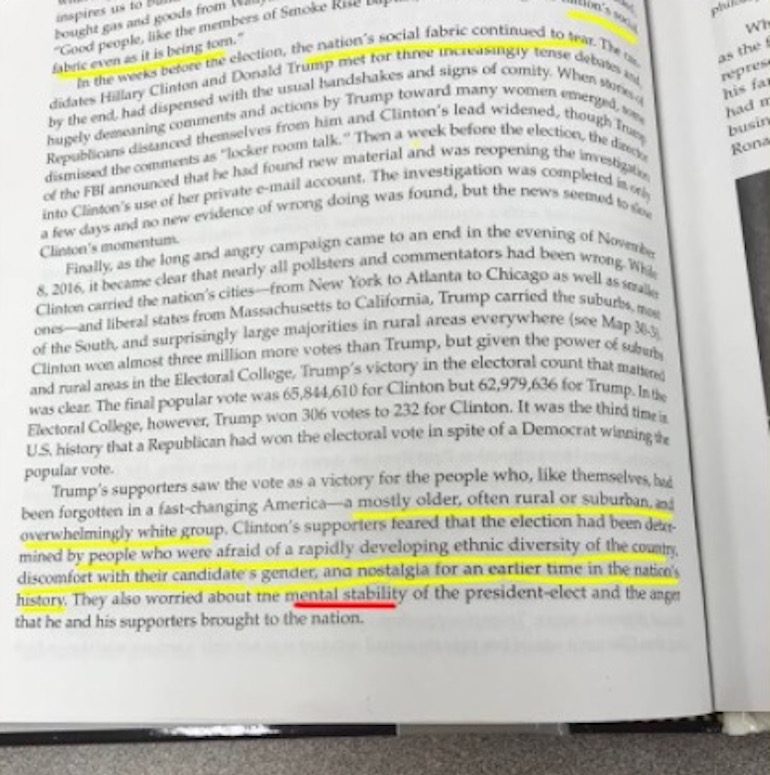 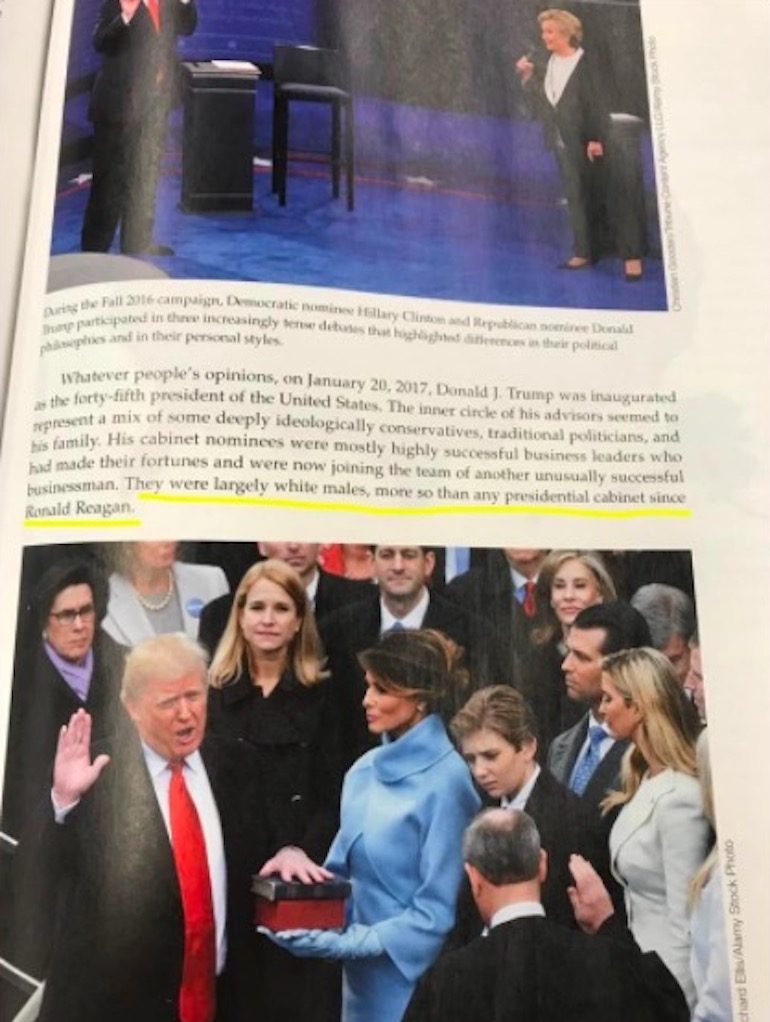 Whatever people’s opinions, on January 20, 2017, Donald J. Trump was inaugurated as the forty-fifth president of the United States. The inner circle of his advisors seemed to represent a mix of some deeply ideological conservatives, traditional politicians, and his family. His cabinet nominees were mostly highly successful business leaders who had made their fortunes and were now joining the team of another unusually successful businessman. They were largely white males, more so than any presidential cabinet since Ronald Reagan. 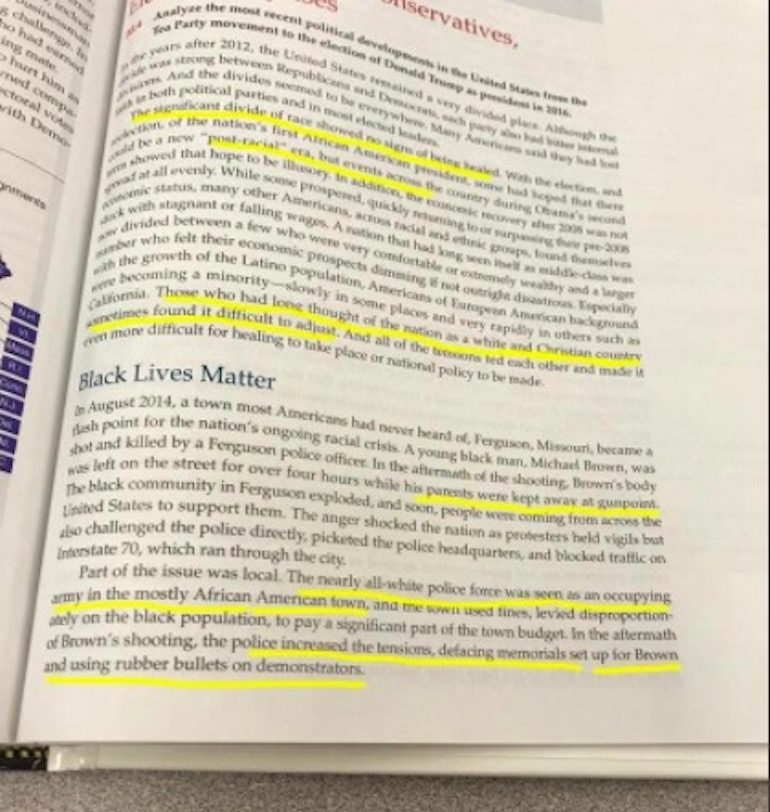 “Those who had long thought of the nation as a white and Christian country sometimes found it difficult to adjust.”

Further, it promotes an “all-white-people-are-racists” narrative in a section about the activist group Black Lives Matter. The group entered the national stage through demonstrations it held after Michael Brown was killed by Ferguson, Missouri police in 2014.

“The nearly all-white police force was seen as an occupying army in the mostly African American town,” the book states, adding, “…police increased the tensions, defacing memorials set up for Brown and using rubber bullets on demonstrators.”
Source: The Blaze

Can you imagine the outrage if anyone included in an AP History textbook one negative word about Barry?

Like maybe how he weaponized powerful government agencies to punish his political enemies?

That would just never fly, would it?

So much for teaching students history.

They’re not even giving fair coverage of recent history — like a year ago history.

No wonder Millennials are so woefully ignorant of issues — two thirds of American millennials don’t know that 6 million Jews were killed during the Holocaust.

That, Dear Readers, is both irresponsible and sad.

We need to fix our education system.