And then she boasted ‘I will never be fired’.

But the Left says WE are ‘the reason America is so divided’. Sure we are.

Some people are so demented that they just can’t help but spew hate, even when a person has just died.

Barbara Bush, who was only the second woman in history to be both FLOTUS and mom to a POTUS has just completed a long and full life.

She was a champion of literacy and leukemia research. A strong woman who pushed back against being unnecessarily partisan. A woman who was admired by people on both sides of the aisle, probably more than her husband was.

She is described by many as classy, and gracious.

Even Jesse Jackson set aside his usual partisanship to say a kind word:

But that means nothing to the new Rabid Left. Whatever they can’t assimilate they will destroy.

Randa Jarrar, a professor in Fresno State’s Department of English, expressed her displeasure with the Bush family within an hour after the official announcement that Mrs. Bush died Tuesday at the age of 92.
“Barbara Bush was a generous and smart and amazing racist who, along with her husband, raised a war criminal,” Jarrar wrote on Twitter. “F— outta here with your nice words.”
…
Jarrar, who in her Twitter messages describes herself as an Arab-American and a Muslim-American woman, goes on to maintain that she is a tenured professor and makes $100,000 a year.
“I will never be fired,” Jarrar tweeted.
In a separate tweet, she wrote: “If you’d like to know what it’s like to be an Arab American Muslim American woman with some clout online expressing an opinion, look at the racists going crazy in my mentions right now.”
Source: FresnoBee 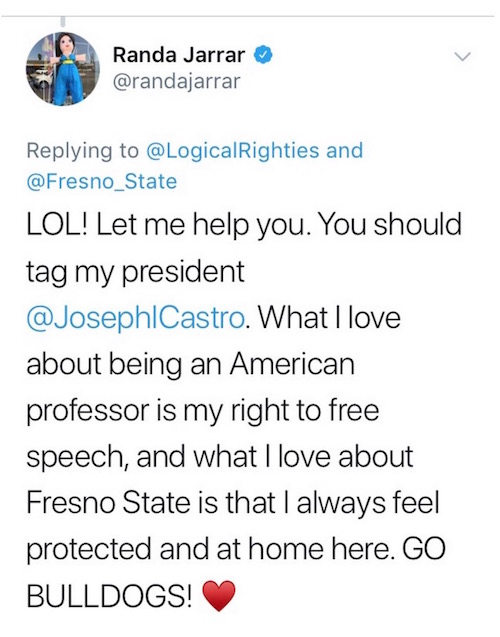 As for being ‘racist’, let’s use yet another Leftist’s tweet to answer that.

The world mourns for the Bush Family. I would like to share this picture of House of One at Marienkirche church in Berlin. We our all part of same human soul. Barbara knew this in her heart and spent her life inspiring all of us to feel same way. pic.twitter.com/ZOWkizR72H

Notice the Twitter handle on that last one isn’t exactly a “hard-core Right Winger”.

Coming back to the Prof’s stupidity, two things stand out here.

First, her own words on free speech are actually correct.

They should be written on placards and used in court cases as a go-to argument whenever people from any group, ‘oppressed’ or otherwise try to tell us that free speech does not apply to offensive speech. [And before you ask, yes, that approach to offensive speech is exactly the point. It applies just as equally to speech someone tries to dismiss as ‘(blank) -o-phobic’.]

She is ‘free’ to be an obnoxious harpy.

But that’s only half the story.

It brings us to our Second point. Feel free to ask Mizzou about the ‘other half of the story’. You remember Mizzou, don’t you? They were the school that staged a race-baiting coup over their own administration and demanded a whole lot of concessions, including the wrongful firing of a white administrator.

We’re guessing this prof would count the NYT as a ‘quality’ news source, right? Here’s a headline that might interest her.

Long After Protests, Students Shun the University of Missouri

She is ‘free’ to run her mouth. Naturally.

But students are equally free to take a good hard look at who Fresno is granting tenure as faculty, and pick some other school. Maybe one where education is more important than indoctrination.

When enrollment drops, tenure won’t offer much help against layoffs. Especially if ONE of those Prof’s own arrogance was triggered the enrollment problem in the first place. After all, students are income. Profs are overhead. In her case, that is $100k per year, overhead, as she so proudly pointed out.

Go ahead and roll those dice. Be as ‘loud and proud’ as you want, Randa.

And if that happens… we’ll be “happy” to report that, too.