And THESE are the people we are supposed trust to ‘vet’ our news feeds?

They really don’t care what you think.

That’s not a euphemism or an attitude. It is their battle plan in a culture war.

Their explicit goal is to do to America what they’ve already done to California.

In case you’re too young to remember, California used to tilt Republican. Some guy named Ronald Reagan was Governor from ’67 to ’75. What a difference a couple of generations can make.

And that is exactly the point.

The hard left — and that includes media Giants because the CEO of Twitter retweeted the story we’re referencing here — literally doesn’t care what you or I think. We are not people to be engaged and persuaded, we are obstacles to be coerced or destroyed.

They are staging a revolution, but with the rise of the information age, they have a non-lethal weapon in their arsenal that can be just as dangerous.

You might call it ‘Orwellian’, even. Because it was Orwell that predicted this was coming.

What’s the plan? It’s spelled out in an article written by Peter Leydon, the former managing editor at Wired magazine, on a website published by a previous Twitter CEO — Evan Williams, and retweeted by Twitter’s current CEO, Jack Dorsey:

So, what happened in this ‘great read’?

The author made his us-and-them hatred very plain. It made Hillary’s deplorables line seem like a term of endearment.

We are, to them, the functional equivalent of 19th-century slavers. And we must be destroyed.

Because we do not embrace big-government socialism. (Like, say, Venezuela)
Because we still support fossil fuels. (Try making stainless steel without coal, or gathering and manufacturing the parts for those precious windmills without fossil fuels.)

Here’s a little bit of the pitch:

In the early 2000s, California faced a similar situation to the one America faces today. Its state politics were severely polarized, and state government was largely paralyzed. The Republican Party was trapped in the brain-dead orthodoxies of an ideology stuck in the past. The party was controlled by zealous activists and corrupt special interests who refused to face up to the reality of the new century. It was a party that refused to work with the Democrats in good faith or compromise in any way.

The solution for the people of California was to reconfigure the political landscape and shift a supermajority of citizens — and by extension their elected officials — under the Democratic Party’s big tent. The natural continuum of more progressive to more moderate solutions then got worked out within the context of the only remaining functioning party. The California Democrats actually cared about average citizens, embraced the inevitable diversity of 21st-century society, weren’t afraid of real innovation, and were ready to start solving the many challenges of our time, including climate change.

California today provides a model for America as a whole. This model of politics and government is by no means perfect, but it is far ahead of the nation in coming to terms with the inexorable digital, global, sustainable transformation of our era. It is a thriving work in progress that gives hope that America can pull out of the political mess we’re in. California today provides a playbook for America’s new way forward. It’s worth contemplating as we enter 2018, which will be a critical election year.

Hear that? It’s the sound of the ‘progress’ they’re here to cram down your throat — whether you like it or not.

Does the fact-checking of news sources by their handful of favorite leftist groups make more sense now?

Let’s leave aside for a moment the colossal s-hole they’ve managed to turn California into, with taxes off-the-charts high, and businesses being driven out of state in waves.

Leave aside the poverty, homelessness, or needles and feces on the streets. It’s ‘amazing’. Why? Because they’ve strong-armed it into bending the knee to their ideology.

Notice the photo they used: 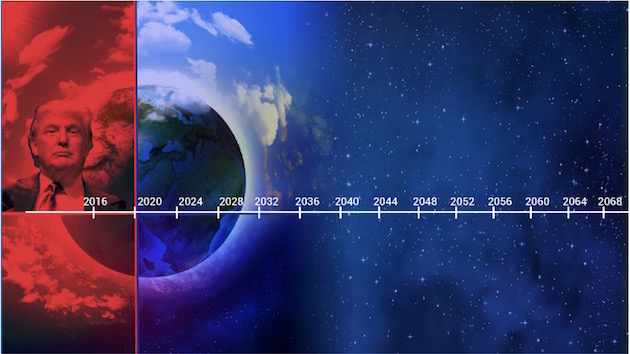 What does that mean for the rest of the country? Well, ‘Civil War’ is such an ugly term. What with the bullets and all. But it’s basically accurate. We and they just cannot coexist.

(This is the part where we remind the reader that Marxist ideology is, by nature, revolutionary.)

Basically accurate? Scratch that. The article used this subhead:

Understanding the Context of the New American Civil War

They’re not playing around. That ‘fundamental transformation’ Obama was working on? It wasn’t just him.

Which systems are at odds, according to them?

Fossil fuels versus wind and solar.
Culture and worldview — Philosophy and Economy.

These paragraphs are dripping with self-righteous arrogance:

At some point, one side or the other must win — and win big. The side resisting change, usually the one most rooted in the past systems and incumbent interests, must be thoroughly defeated — not just for a political cycle or two, but for a generation or two. That gives the winning party or movement the time and space needed to really build up the next system without always fighting rear-guard actions and getting drawn backwards. The losing party or movement will need that same time to go through a fundamental rethink, a long-term renewal that eventually will enable them to play a new game.

You might want to think of names like Winfrey, Besos, and Weinstein as you read the next section:

Let’s just say what needs to be said: The Republican Party over the past 40 years has maneuvered itself into a position where they are the bad guys on the wrong side of history.
…
The Republican Party is all about rule by and for billionaires at the expense of working people. Trump is literally the incarnation of what the party stands for: shaping laws for the good of billionaires and the 1 percent. His cabinet is stuffed with them.
…
The Republican Party for the past 40 years has mastered using dog whistles to gin up racial divides to get their white voters to the polls. Trump just disposes of niceties and flatly encourages white nationalists, bans Muslims, walls off Mexicans, and calls out “shithole” countries.

Racist? Really? Obama and the Black Congressional Caucus were in a photo with Louis Freaking Farrakhan! An awkward association more than a few Democrats have connections with.

After that point, it was all downhill for the conservative GOP agenda in California. Schwarzenegger understood the sea change early and dumped right-wing populism and became far more moderate, going along with many progressive priorities. He soon started working with Democrats in the legislature on infrastructure, culminating in the passage of Proposition 1B in 2006 ($20 billion for roads and public transportation)

Under the pretense of ‘compassion’ and ‘tolerance’ they would lead a generation into the sort of chains that once shackled Warsaw-pact nations, that enslaved the Cuban people while enriching its leaders, and is now dangerously hollowing out a once-prosperous Venezuela.

None of those ideas worked there, or in any of the cities that have had leftist leadership for generations (see: Detroit, Baltimore, Chicago). But the ‘Progressive’ is always convinced that ‘it can work here’.

If you’re getting ‘weary’ in the fight, or don’t think your RINO is worth supporting — stop and reflect. Remeber what the other side’s real objectives are; what the stakes are.

Andrew Breitbart had his priorities about right.

First the Demcorats. THEN the RINOS.

You’re not thinking of sitting this one out, are ya?