For all their talk about loving ‘nasty’, independent or ‘persisting’ women, they sure don’t like THIS kind of woman.

She’s not their kind of rulebreaker.

The other side cheers the kind that will go topless and scrawl obscenities all over their body to make a political point, like the FEMEN chick who was heckling Bill Cosby.

Considering what she thinks Cosby is guilty of, was going topless REALLY the smartest way to make her point? Oh well, they have their kind of rabble-rousers. And they can keep them.

Aren’t you glad our side has a different sort of independent woman? 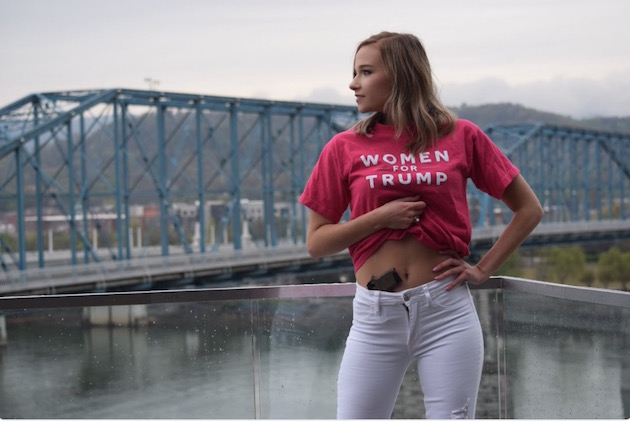 Leaving aside her obvious good looks and the courage it takes to wear something as counter-culture as a ‘Women For Trump’ shirt… what stands out in this photo?

A Tennessee college senior is sticking to her guns after posting a graduation photo in which she stares wistfully off-camera while lifting her “Women for Trump” t-shirt to expose a firearm in her waistband.

Despite receiving what she called a surprising “amount of hate” on social media, Brenna Spencer, 22, says she has no regrets.

“I know the Tennessee state gun codes …. I carry everywhere that I’m allowed to carry,” the University of Tennessee, Chattanooga student said in an interview.

On Twitter, where Spencer’s profile states that “political correctness offends me,” she posted the provocative photo with the caption: “I don’t take normal college graduation photos…”
Source: Fox

And if she’s already got that kind of swagger, we figure she’ll do well in whatever she takes on after graduation.

Let the other side have all the pink-haired bowl-cut haters they want.

They’re probably too dumb to even realize that they’ve got the short end of that stick.