A ‘family photo’ of sorts was released over the weekend.

It was taken in the context of Barbara Bush’s funeral. In that picture were past and present residents of the White House.

We’ve got Bush the elder sitting in the foreground in his wheelchair. We’ve got Dubya with his arm around both his wife and Hillary — we’ll come back to that in a minute.

We’ve got Bill close in beside them, and a big gap between the Clintons and Obamas. Purely coincidence, to be sure. Nothing to be read into that gap. See for yourself. 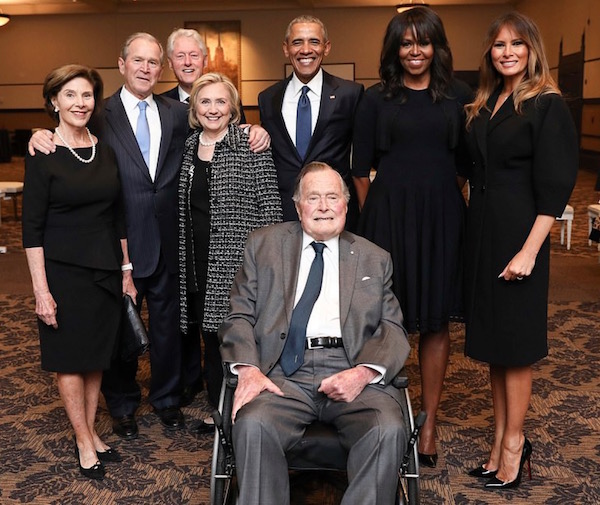 Then Obama and Michelle, with Melania on the right-hand side.

Clintons and Obamas didn’t even pretend to want smaller or more effective government. And as far as ‘control freaks’ go, have we forgotten the IRS admitting that they were targeting Obama’s political rivals in an election year, and basically got away with it?

Hillary looked at grieving families and told them that they would see that justice was served against this nobody filmmaker who got frogmarched to jail in the middle of the night, when Hillary already knew that Benghazi wasn’t about that at all.

Dubya’s arm was around her.
How appropriate. Not in the MeToo sense (Bill has that department all locked up) but in ‘reaching across the aisle.

The younger Bush was likable enough, but the Patriot Act caused problems ripe for abuse, and he actually believed the Left when they told him that if he drifted left and supported big ‘compassionate’ Domestic programs, they would play nice with him.

Spoiler alert: they lied. Instead, he got photoshopped pictures of his face with monkeys and Hitler mustaches.

Who is the only one in this crowd who is supporting the slashing of government red tape, the restricting of Presidential Authority to within its Constitutional Mandate, and calling on Congress to step up and resume their Constitutional role?

That would be the one representative from the Trump Family in that photo, Melania.