How else could they keep a stranglehold on the arts if they don’t punish all dissent?

There is one ‘acceptable’ opinion on Election 2016. It will be provided for you.

That Hollywood-approved opinion is “I’m with her”.

In the name of ‘tolerance’ failure to walk lockstep with ideological purity will NOT be tolerated.

Because in 2018, tolerance means beating dissenters into submission. Especially if they happen to be gorgeous, successful AND extremely talented.

Shania Twain was asked by a Liberal Brit mag who she would have supported in 2016.

Given the choice between Hillary ‘bimbo eruptions’ and ‘Frequent Liar Points’ Clinton or Donald Trump… she ‘shocked’ the public by going with Trump.

It’s a bogus question anyway. It’s an us-versus-them ideological test where they filter out who they can reward, and who they should ostracize. The ostracizing didn’t take long.

An apology was demanded, and offered.

She said: ‘I would like to apologize to anybody I have offended in a recent interview with the Guardian relating to the American President. The question caught me off guard.

‘As a Canadian, I regret answering this unexpected question without giving my response more context.’

The That Don’t Impress Me Much hitmaker continued by explaining that she recognizes the sociopolitical climate and that her core values have been centered around being inclusive.

Twain said: I am passionately against discrimination of any kind and hope it’s clear from the choices I have made, and the people I stand with, that I do not hold any common moral beliefs with the current President.
[…]
‘I was trying to explain, in response to a question about the election, that my limited understanding was that the President talked to a portion of America like an accessible person they could relate to, as he was NOT a politician.
Source: DailyMail

It was a British publication questioning a Canadian musician. What the hell does Trump have to do with either of them?

She’s not even eligible to vote in the US! A better question would be “did she vote for that Moronic Prime Minister Canada is stuck with?”

That question could serve only one purpose — making her take a stand — are you for us or against us?

Do we still need to keep going over this? Ellis Island award? Photo with Rosa Parks and Mohammed Ali? Ringing any bells? 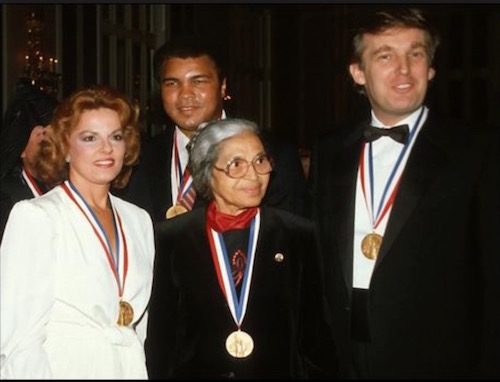 That doesn’t matter to them. Nor do any of the hires Trump made while in office.

Nor does the historic growth in employment levels among everyone — including underprivileged neighborhoods, of any and every ethnicity.

Hillary and Bill plundered Haiti and used it to enrich their political friends and allies.

Rand Paul — a politician who has no problem voting against DJT when it suits him — defended the President against charges of racism by pointing to his record in Haiti.

Instead, Paul, an ophthalmologist, cited financial backing Trump provided for visits he and other surgeons made to Haiti and Central America to perform eye surgeries.

“I think it’s unfair then to sort of all of a sudden paint him, ‘Oh, well, he’s a racist,’ when I know, for a fact, that he cares very deeply about the people in Haiti because he helped finance a trip where we were able to get vision back for 200 people in Haiti,” Paul said. — Politico

None of that matters.

They have decided Trump is guilty of all sorts of things — evidence be damned — and anyone with a public career foolish enough to support him, will be found ‘guilty’ of those same things through ‘guilt by association’.

But somehow, ‘guilty by association’ doesn’t work the same way for figures on the Left.

Bill Clinton; Harvey Weinstein; Anthony Weiner; friend of the Congressional Black Caucus, and key women’s march leaders Lewis Farrakhan with his blatant Jew-hating rants; Matt Lauer; they and their buddies somehow don’t ‘contaminate’ all of their political friends and relations.

We can’t POSSIBLY imagine why there’s a double-standard from our honest-and-true news reporters.