Of course they did.

It’s ‘totes kewl’ for the Tide Pod eaters to suggest that Jesus was gay in an article on consent three days before Easter.

Would they dare do this with Mohammed three days before Ramadan?

If they did, they’d be banned from the United Kingdom for life because…’racism’.

This, however, is no joke.

In an edition published just before Easter, the Montana State University student newspaper featured explicit references to performing sexual acts on Jesus Christ, who is depicted exposing Himself.

The student publication, funded by mandatory student fees, featured the piece, titled “The Highest form of Consent,” in its April Fool’s Day edition of the MSU Exponent, “sexxxPONENT,” a copy of which was provided to Campus Reform…

…All students enrolled at Montana State University must subsidize the Exponent at the rate of $2.65 per semester. These funds are only available to the Exponent, and no other alternative student publications. There is no option to waive the fee.

The article has been taken down after the exposé by Campus Reform.

They did post an image of it before it was removed from the site: 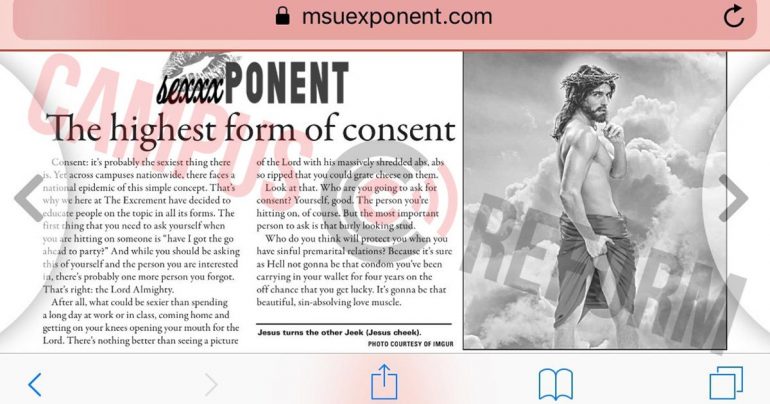 Here is the entirety of the article:

Consent: it’s probably the sexiest thing there is. Yet across campuses nationwide, there faces a national epidemic of this simple concept. That’s why we here at The Excrement have decided to educate people on the topic in all its forms. The first thing that you need to ask yourself when you are hitting on someone is “have I got the go ahead to party?” And while you should be asking this of yourself and the person you are interested in, there’s probably one more person you forgot.  That’s right: The Lord Almighty.

After all, what could be sexier than spending a long day at work or in class, coming home, and getting on your knees opening your mouth for the Lord. There’s nothing better than seeing a picture of the Lord with his massively shredded abs, abs so ripped that you could grate cheese on them.

Look at that. Who are you going to ask for consent? Yourself, good. The person you’re hitting on, of course. But the most important person to ask is that burly looking stud.

Who do you think will protect you when you have sinful premarital relations? Because it sure as Hell not gonna be that condom you’ve been carrying in your wallet for four years on the off chance that you get lucky. It’s gonna be that beautiful, sin-absolving love muscle.

That is just sick.

And utterly disrespectful of Christians.

The article calls the MSU newspaper The Excrement rather than The Exponent which is the paper’s real name.

In this case, it seems that the parody name is much more fitting than the real one.

The paper sent a statement to Campus Reform:

“The editorial team decided, after publication, that the article in question was not in keeping with our content standards for satire. Additionally, after considering the timing of publication with Holy Week, we decided that removing the article from our online presence was the responsible decision.

“The MSU Exponent has been in print since 1895, sparing a few years during WWII. We have an extensive archive available for your perusal. You may access the archive via Montana State’s campus library. I honestly do not know if any religious figures/icons/deities/etc. have been satirized before in the Exponent.”

Well, at least they did get shamed into pulling it from the online version.

But all of the print editions are still out there.

Maybe they’ll get enough negative reaction to actually offer an apology in the next issue.

Ok, MSU Christians — the ball’s in your court.

Contact the school newspaper and tell them that you didn’t think that satire piece was ‘cheeky’ — it was blatantly offensive.