Conservative, Kyle Kashuv, has been an outspoken advocate for the Second Amendment. The Marjory Stoneman Douglas Junior just got some fantastic news…

This kid is really something.

He’s gone against the flow and supported the ‘right to bear arms’ when his fellow students hopped on the ‘gun control’ train.

Instead, he’s laid the blame for the massacre on the Broward County Sheriff’s Office, the School Resource Officer, the policies of the Broward School district, and the shooter himself.

Unlike those other activists, Kashuv was in the same building when the gunman opened fire on his innocent schoolmates and teachers.

Kyle has consistently been willing to debate any of the other anti-2A Parkland teens that have become Media (D) darlings. But they’re not willing. So, he cleverly and succinctly takes them to task via Twitter.

He was ignored by the Media (D) for a while so they could push the gun-grabbing narrative.

But this kid is persistent.

He created an app for troubled students to anonymously reach out to their peers and was able to get his voice out there.

Kyle went to Washington and met with lawmakers, and spent some time with the First Lady and met President Trump in the Oval Office. 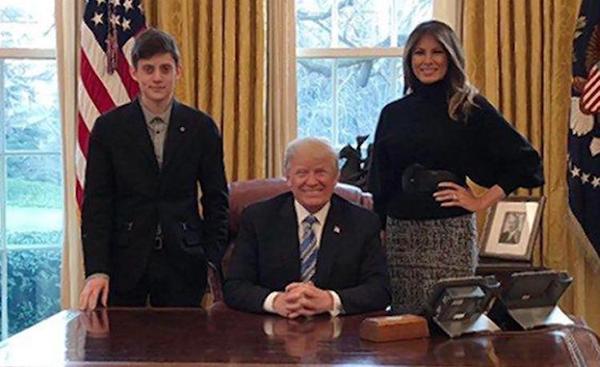 He has corrected the false narratives by the Media (D) and even used his verified Twitter account to correct Whoopi Goldberg’s statements about him.

He had been advocating for the Second Amendment without ever having fired a gun until recently.

When he shared photos of himself at the gun range with his dad, he was hauled in front of the School Resource Officer to explain himself.

Got some good news! Ranked #1 in my class of 856 students. #WINNING pic.twitter.com/A75sZMVvJw

Ranking top in your class to own the libs

Of course, someone just couldn’t resist rubbing it in David Hogg’s face a little:

It is true, though.