Imagine the difference this guy could make if he said Jesus as often as he said black and white?

A new church is starting up in this guy’s neighborhood, and man is he steamed!

Maybe he isn’t aware that the gospel is all about ‘grace and forgiveness’. You’d think a pastor would be up to speed on something like that. Especially one with the ‘Baptist’ in the title.

Nope. Instead, he is nursing old hurts and grievances. He is encouraging bitterness that goes back hundreds of years.

He might want to re-think his stance and priorities. Especially if he cares about what it means to have a meaningful legacy from a big-picture perspective.

Here’s what he was reacting to:

The Church of the Highlands, which has 16 branch locations that attract more than 40,000 worshippers weekly to hear sermons by founding Pastor Chris Hodges, recently announced a plan to open a church in a high-crime neighborhood of Birmingham.

Jordan assumes that means his side of the city – either West End, Ensley or the Fair Park areas.

Hodges announced that a black minister on the Highlands staff, former Auburn University football player Mayo Sowell, would be the pastor.

“It’s a slavemaster church,” Jordan said in an interview with AL.com. “I call it plantation religion, slavemaster religion. The white rich folks start a church and put a black pastor in charge of it.”

Responding to the sign at New Era Baptist Church, Mayor Randall Woodfin posted the church sign on social media with a message.

“There is a spirit over this city that has to be brought down,” Woodfin wrote. “A spirit of racism and division. We have to change the conversation to what we need it to evolve into.”

Jordan said he also worries that the Church of the Highlands will get City of Birmingham funding for its project, at the expense of black organizations including neighborhood associations.
Source: Alabama

There is a spirit that is over this city that has to be brought down. A spirit of racism and division. We have to…

Let’s be honest about what’s really going on here. He is afraid somebody new is going to come in, and people who have had this little ball of hate as their pastor might like the other guy better. That means less people in seats, and less influence, money, whatever.

He has no interest in showing grace or kindness to ‘those people’ and is teaching his entire congregation to normalize bitterness and hostility.

Sounds like he’s already failed to heed the warning in Hebrews 12:15.

See to it that no one fails to obtain the grace of God; that no “root of bitterness” springs up and causes trouble, and by it many become defiled

“It’s a slavemaster church,” Jordan said in an interview with AL.com. “I call it plantation religion, slavemaster religion. The white rich folks start a church and put a black pastor in charge of it.”

The accusations he’s spouting about a ‘slaveholder’ church he clearly knows nothing about (has anyone told the man it’s 2018?) would be laughable if he weren’t in a position to shape other people’s views about their neighbors.

He has a “message” to every Black American attending White Churches — Leave.

So blinded is he by bitterness, that he didn’t just get his history wrong, but he was dumb enough to quote one of Jesus parables and get the point 100% wrong.

Starting at the 4:40 mark on the lower video we see the other side of the sign, and his explanation: 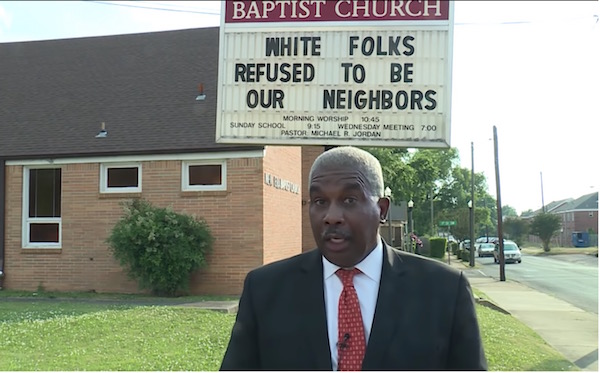 A real charmer, this guy is.

Did you notice what WASN’T on the list of things he said pastors offer a community? The Gospel. Maybe that’s his problem.

Naturally, there was a racist Trump dig, too. Becuase it’s normal for pastors to slander people, right? That Ninth Commandment doesn’t apply to the likes of him.