Why do so many Leftist solutions to pressing problems tend to backfire?

We don’t just mean the economic solutions, the kind that has oil-rich Venezuela eating stray cats off the streets.

We don’t just mean social problems like schools in Democrat strongholds failing those who have the misfortune of living there:

One of their biggest crisis-event causes is Environmentalism.

That’s a big word that used to mean people who wanted clean air, clean water, and no litter.

Now it means “carbon footprints” and Wait, no… No, that’s not it either.

More specifically, these toxic chemicals become an environmental threat when solar panels reach their end-of-life stage and need to be disposed. Panels left in landfills may break apart and release toxic waste into the ground or even enter bodies of water. Solar panel disposal in “regular landfills [is] not recommended in case modules break and toxic materials leach into the soil,” Electric Power Research Institute determined in a 2016 study.

There is growing concern over the possibility of rainwater washing cadmium out of panels and into the environment. In Virginia, for example, a group of locals are pushing back against a proposal to construct a 6,350 acre solar farm in Spotsylvania County.

Why should that surprise us? The tried to force those stupid toxic, mercury-filled spiral ‘compact fluorescent’ bulbs down our throats.

And besides that there’s the small matter of the batteries such energy are stored in. They tend to use the rare earth, Lithium.

If the solar panels weren’t enough to make you rethink the environmental claims of ‘green energy’, maybe the mining of Lithium will. Look it up. The pictures alone are devastating. 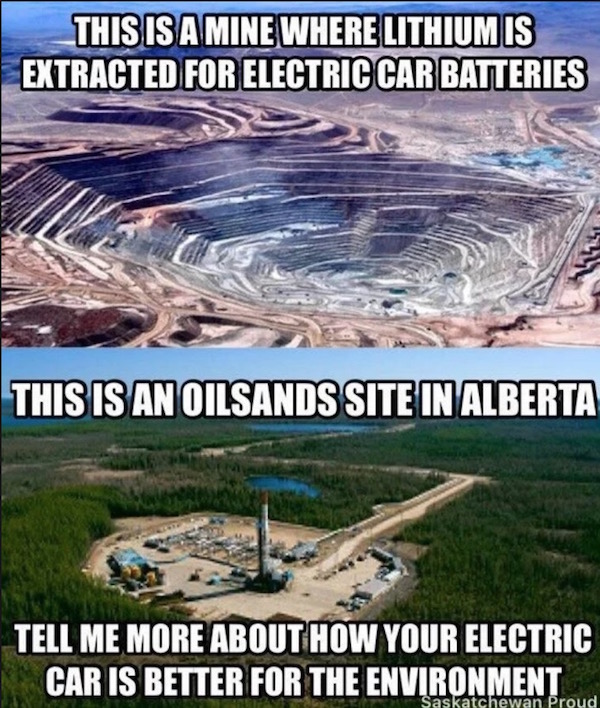 It might make for an interesting conversation the next time a sanctimonious hybrid driver tries to chew you out for driving a real car or even (gasp!) a truck.

Will CNN be reporting on this?