Hillary’s public appearances have become stranger than ever…

Hillary has not quit her campaign despite her humiliating election loss in 2016.

She’s blamed white women, Russia, Netflix specials, ‘deplorables’, fake news, racists, the Electoral College, misogynists, and a whole host of other things for not being in the White House today.

(I say it’s because we have a good and just God.)

But it isn’t her words that people are noticing — it’s that she’s wearing heavy coats and scarves in late May.

What’s even more strange is the weird lump that she has near her shoulder.

Even the Media (D) are beginning to take notice.

Hillary Clinton attended a Memorial Day parade in upstate New York on Monday wearing yet another over-sized coat and scarf – adding to speculation that she is possibly hiding a back brace.

The 70-year-old has been spotted multiple times of late wearing jackets and scarves that are draped down over her shoulders ever since eagle-eyed social media users spotted a strange protrusion coming out of her back earlier this month.

Her Memorial Day appearance in Chappaqua on Monday was no exception.

Sure, it was a mild 60 degrees in Chappaqua, but that’s more light sweater weather than buttoned-up trenchcoat with a scarf weather.

Some people online are speculating that Hillary is wearing the coats and scarves to conceal a back brace.

The questions began to be raised online when Hillary appeared in New York earlier this month wearing a heavy coat and scarf in 90-degree heat. A clear lump was visible under her coat. 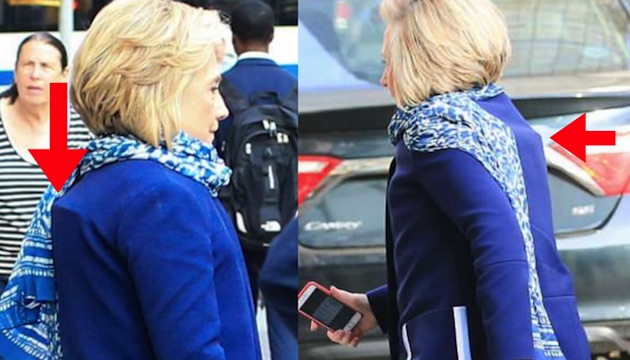 The speculation hasn’t stopped since.

“Look at me. It’s 90° and you’re sweating your nads off but here I am with a reptilian exoskeleton back brace, a battery pack to power my soul and layers of scarf things to hide the fact that I’ve no carotid pulse. I am not human and can’t feel empathy. I am mutant. I’m Hillary.” pic.twitter.com/FBZQWoTcLt

The Drudge Report tweeted about it adding fuel to the fire:

Now that we are heading into the summer months, it is obvious Hillary is hiding something with her bulky clothing.
Hillary Clinton has been spotted many times recently wearing a heavy coat and scarf strategically placed to hide what appears to be a back brace. pic.twitter.com/tHMdpCLmu5

She’s been wearing the coats and scarves a lot lately.

Hillary then gave several on stage appearances in New Zealand and Australia the following week as part of a speaking tour where she draped a $1,100 patterned Hermes cashmere blend shawl around her shoulders.

Just last week, the former Democratic presidential candidate took to the stage at Harvard in 84 degree temperatures wearing a long coat and bulky scarf as she accepted the university’s Radcliffe Medal for her leadership.

Since we’re already deep into conspiracy theory territory, I’ll give you my guess.

I think Hillary has osteoporosis and she’s using the back brace to keep her from looking hunched over.

She could be suffering from a fracture in her back, or from a Dowager’s Hump. Some people practice yoga to prevent the hunching of the upper back and shoulders. If you recall, Hillary said that her deleted emails were about yoga.

Think about it — it would explain her constant injuries. Remember the time she had to wear a leg brace after injuring her foot while on her book tour?

It also makes sense why she needs so much help up the stairs. 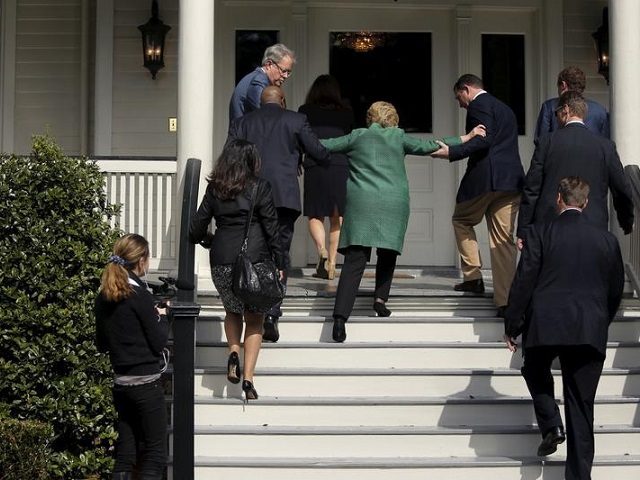 But if she has both, well, that would explain her falling and fractures.

And why everyone around her is helping her up and down stairs.

Remember when she slipped on stairs in India and was out of commission for a while?

Hillary seems to always be slipping, stumbling, and falling.

I guess we’ll see how long she wears these long coats and scarves now that the weather is heating up.

Do You Think Hillary Is Wearing A Back Brace?