One activist Schoolteacher got a lot of attention for ‘correcting’ a letter from Trump’s White House.

It was received with glee by the usual people with a (D) after their name — because all who slag Trump must be celebrated… however ineptly they do so.

But now that an ACTUAL editor from the American Thinker has fact-checked that teacher’s work, and not only would it behoove people to quietly delete that from their timelines before anyone realizes how foolish they look… but it also raises serious questions about the qualifications of those we have entrusted with teaching our children.

All the usual suspects LOVED it:

CNN, The New York Times, The Independent, USA Today, Esquire, et al. have gleefully jumped on a Facebook post by a Democrat, a retired high school English teacher, who “corrected” the president’s grammar. “I have never, ever, received a letter with this many silly mistakes,” Mason said.

Here’s a little about the retired schoolteacher whose work this was:

Mason, who taught English at middle and high schools for 17 years before retiring last year, is a devoted rhetorical activist, writing letters, emails and faxes to state, local and federal officials.

A recent project had Mason, currently an Atlanta resident, penning a postcard every day for a year to Trump.

“You can choose to be an active part of this democracy in myriad ways,” said Mason, who is also a former actress at Greenville’s Cafe and Then Some and an author of a book of criticism about Southern writer Clyde Edgerton. “I choose to write because I’m a good writer, and I’m funny.

“When I taught school for 17 years, I taught my kids in English that the way you present yourself in writing says a lot about who you are, about what you care about, about whether or not you care to get it right.”
Source: USAToday

Even in this interview, CNN has sense enough to bring up the style book in questioning her corrections. Mason acknowledges the style book, and promplty dismisses it, because her own, PERSONAL guiding philosophy should be far more important than any style book. For some reason.

Here are her ‘improvements’. 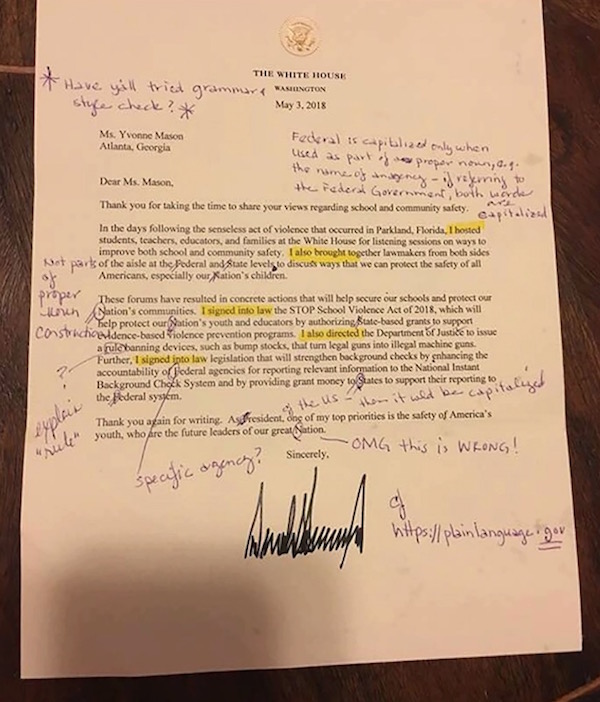 ‘Whether or not you care to get it right’ — keep that phrase in mind as two REAL editors take her to the woodshed.

The following is from the critique from the American Thinker response:

Her “corrections” are baffling.

Granted, the letter capitalizes state, nation, federal, and president. I don’t like such capitalizations, either. But that’s the way official federal prose is written. As a self-styled expert on English grammar, Ms. Mason should at least be aware of the Government Printing Office Style Manual. It’s used for all official federal publications, as Aaron Keller, lawyer and ex-English teacher, explains.

“She also opined that while the letter was probably written by staffers, the president signed it. (Has she ever heard of Autopen?)”

Ms. Mason even objects to “accountability of Federal agencies,” writing below the phrase, “specific agency”? Ma’am, would your understanding have been improved had the president’s writer enumerated the agencies that may be affected by the new law (and you can bet that more than one is affected)? What if said enumeration were incomplete? Would that have prompted you to issue another “correction”?

There are a few more comments, about English Teachers, the media, and the general shame this brings upon both before another editor added a few more observations:

The highlighting of “I” clauses reeks of robotic adherence to Education Establishment diktats to the detriment of common sense. Why wouldn’t the president use the first-person singular pronoun in a letter detailing a number of things he himself did? How would Yvonne Mason have him rewrite phrases expressing the thought “I did this” in a way that does anything but obfuscate that thought?

Worse is “OMG this is WRONG!,” so beloved by the New York Times that the paper headlined its feature with it. (Never mind the obnoxiousness of a putative language authority using “OMG” in a professional capacity.)

If you make the same ‘mistake’ all the way through… it is a sign of consistency. Especially if they are backed up by a style book.

It’s not a reason to unload with the phrase that was so delicious to the press:

Worse is “OMG this is WRONG!,” so beloved by the New York Times that the paper headlined its feature with it. (Never mind the obnoxiousness of a putative language authority using “OMG” in a professional capacity.) Even if the capitalization were an error, that’s the writer’s understanding of the language.

And then came the coup de grace… one that must be particularly hard for an ‘expert’ such as herself to hear.

And it’s all over!

She’s not getting back up from that one!

Thanks for playing, though.