There’s a special place in hell reserved for people like this.

A 25-year old mother of three was pimping out her two daughters to two men for cash.

Morgan Summerlin waited in the living room while the girls were sexually abused and the younger girl was raped.

Morgan Summerlin, 25, pleaded guilty to rape and trafficking a person for sexual servitude, cruelty to children and enticing a child for indecent purposes on Friday.

The court heard that Summerlin would take her two daughters, aged 5 and 6, to the home of 78-year-old Richard ‘Pop’ Office, WSVN reports.

As Summerlin waited in the living room, Pop went to the bedroom with the girls, where he raped the five-year-old and got the other girl to rub his feet, according to the Fulton County District Attorney.

He then gave them $100, which Summerlin then took off them, the court heard.

Office faces life in prison without the possibility of parole, plus 146 years. He was found guilty of rape, child molestation, trafficking a person for sexual servitude, enticing a child for indecent purposes and sexual battery.

The mom also brought her daughters to the home of Alfredo Trejo who would also reportedly rape and molest them.

He was sentenced to 25 years in prison, plus life on probation.

She was like an Uber for pedophiles — bringing her girls to these disgusting perverts to be abused.

This isn’t a mother.

This is a monster.

Summerlin will be sentenced June 4.

‘It is difficult to imagine facts that are more horrific than those found in this case,’ Chief Senior Assistant District Attorney Irina Khasin told news station WSVN.

‘I am hoping these two little girls can somehow survive this abuse and grow into healthy adults who can lead a productive and fulfilling life.’

Summerville posted average ‘mom’ things on her Facebook account. She had photos of her children and included posts about plans she had to do normal family things like take them to the circus.

In one post she wrote, ‘Goodnight fb gotta get up early taking kids to the final circus im so excited‘. 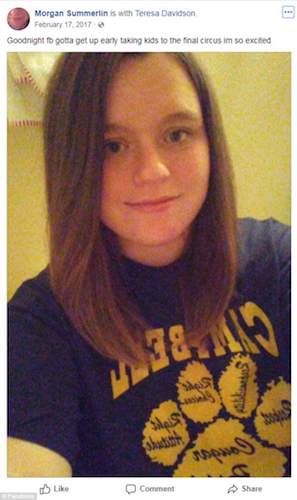 Summerlin’s mother, when notified by the girls about the abuse, did nothing.

The girls’ grandmother, Teresa Davidson, has also pleaded guilty to cruelty to children after she failed to act when they told her they were being abused.

She was sentenced to five years, to serve one minus time served.
Source: Daily Mail

It’s times like this that almost make you rethink that ‘cruel and unusual punishment’ restriction in our legal system.

These monsters deserve a creative and horrific punishment.

Prison time is way too good for them.