Can somebody please explain how these ‘offenses’ could POSSIBLY violate the new rules?

You can find all kinds of craziness on the internet — some of it is pretty outrageous. The internet is (or at least WAS) kind of a Wild West of content.

That all changed after the last election. It was all in the interest of ‘fairness’ and decency of course.

Sites on the right (like ours, and others) that either, through standard journalism, dig up their own stories or use well-cited sources for those who have done so get blasted as ‘fake news’.

Any biases we have are openly acknowledged. Our explicit opinion pieces are marked as opinion, and even the ‘slant’ on our news take are usually pretty clearly spelled out. For example, our site says:

ClashDaily.com is a mosh pit of breaking news, edgy opinion, lots of attitude, and a call to action for God- and country-loving patriots. Yes, ClashDaily.com loves America’s founding documents and its Judeo-Christian worldview, and we will defend the aforementioned with an unapologetic zeal and an irreverent sense of humor.

But sources like NBC, CNN and ABC tell us they are ‘objective’ and they get the benefit of the doubt. Even though CNN fired staff over bogus stories and NBC just ran a totally bogus story about wiretapping the President’s lawyer.

(Meanwhile that ‘wiretapping’ story that POTUS and Mark Levin pointed out — drawing strictly from media sources last year — eventually proved substantially true, despite the way the ‘traditional media’ Hammered them both day after day after day.)

So, if you thought life here in the brave new world of censorship would be fair, you’re dreaming in technicolor.

But how can even the most cynical leftist POSSIBLY justify THESE two examples of ‘violations’ that our sites were flagged for? 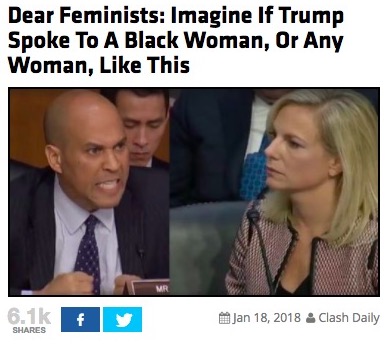 Remember this story? You can even see it in the rage on his face. Here is the clip the story was written in response to:

What if President Trump spoke to a woman this way? ????Senator Cory Booker (D-NJ) demeaned, bullied, degraded and tried to intimidate a woman today in front of the nation. Glaring Crazily, Smashes Fists as he screams at DHS Secretary Kirstjen Nielsen.

Corey Booker was engaging in cheap political theatre, and taking personal shots at a Government Official’s integrity when he tore this strip out of the DHS secretary.

He was trying to score points, demanding that she tell him that the President said a particular swear word.

He took shots at her PERSONAL life, a reference to her ‘first husband’, and we called it unwarranted bullying of an elected official. The clip had millions of views because it was newsworthy.

And if any man with an (R) after his name spoke to any woman like that, there would be outraged cries of “misogynist”! Those cries would be louder still if there was an ethnic difference angle the reporters could exploit to disadvantage their political opponents.

But when we report the political bias of ‘traditional news outlets’ — with a title like this one? WE get flagged? But Booker gets a pass? Go figure.

Oh, and can you guess what the Official Google complaint about this story was? In a story where Booker entirely threw unsubstantiated accusations of racism at a government servant?

As stated in our program policies, Google ads may not be placed on pages that contain content that:

• Threatens or advocates for harm on oneself or others;

• Harasses, intimidates or bullies an individual or group of individuals;

• Incites hatred against, promotes discrimination of, or disparages an individual or group on the basis of their race or ethnic origin, religion, disability, age, nationality, veteran status, sexual orientation, gender, gender identity, or other characteristic that is associated with systemic discrimination or marginalization.

You can see for yourself how we handled the original story.  (Find it linked HERE)

Who do YOU Think did the actual bullying and discriminating… Cory Booker, or the editor writing that he was out of line, and if we had an honest ‘mainstream’ press, they would have called him out for his shameful behavior?

Part of our work here involves pointing to what’s happening, not just in the news, but in the broader culture.

That’s why we carry stories about, Kanye, Rosie, or Bono and not just stories about what happens in Washington, Pyongyang or Berlin.

Since one of the quirks of our culture is a love of ‘best dressed’ stories about female celebrities, this comes up from time to time. The social media gatekeepers try to pawn us off as ‘fake news’ exactly because we use opportunities like this to show the biases in the so-called ‘mainstream media’.

It led to us covering this story pointing out exactly that bias: 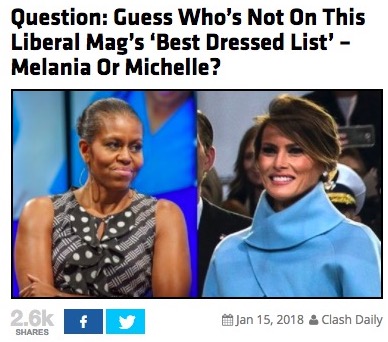 It was an article about the selections by Vanity Fair, and used only such photos of celebrities that you might find in a magazine of that genre.

What complaint was filed against us? The violation was, and I quote:

As stated in our program policies, we may not show Google ads on pages with content that is sexually suggestive or intended to sexually arouse. This includes, but is not limited to:

• pornographic images, videos, or games
• sexually gratifying text, images, audio, or video
• pages that provide links for or drive traffic to content that is sexually suggestive or intended to sexually arouse

The women pictured in our photos were LITERALLY wearing clothes that covered thm from the collarbone to the wrist. Even the photo of Macron’s wife was cropped so you couldn’t see anything lower than the hem of her knee-length skirt.

How is it that clothing choices that would not offend the sensibilites of the headmistress of a 1950’s catholic school are somehow ‘out of bounds’ for Social Media?

They couldn’t be FABRICATING reasons to hurt their political rivals on the right, could they?

If this issue concerns you, don’t just pass it along to your friends, but send it to your elected officials, too. Especially the ones with an “R” after their name.

Maybe it’s something our legislators should take a look at in the interest of that ‘free press’ people like to talk about. It would be interesting to learn how that plan stacks up against existing racketeering laws.