If Trump has proven one thing time and again, it is his uncanny ability to outlast his enemies and rivals.

Over a lifetime, a man such as him has crossed swords with any number of people. Among them was New York Attorney General Eric Schneiderman.

Schneiderman took Trump to court, wanting to settle, but Trump fought it.

How did our President Characterize the AG? As a ‘lightweight’. Schneiderman’s past drug use came up, and The Donald said it ‘wouldn’t have surprised him’ if he still did drugs.

Trump warned in 2014 that Eric Schneiderman was a coke head. pic.twitter.com/3RCzzeq6OQ

Trump’s fans point out that he comes off looking a little like Nostradamus by tweeting this in 2013.

Weiner is gone, Spitzer is gone – next will be lightweight A.G. Eric Schneiderman. Is he a crook? Wait and see, worse than Spitzer or Weiner

Why? Well, you know a leftist is in real trouble when the NYTimes is throwing you under the bus. In their words:

Until Monday evening New York’s Attorney General Eric Schneiderman was a public champion of the #MeToo movement. Now he appears to be the latest sickening example of the scale and insidiousness of the cruelty that movement is confronting. He resigned late Monday after The New Yorker magazine published an article in which four women accused him of abusing them physically and emotionally.

Gov. Andrew Cuomo should appoint a responsible, independent prosecutor to investigate any possible criminal charges against Mr. Schneiderman and abuses of his office.

What’s that? Another liberal whose virtue signaling was used as a screen to cover deprived moral character? 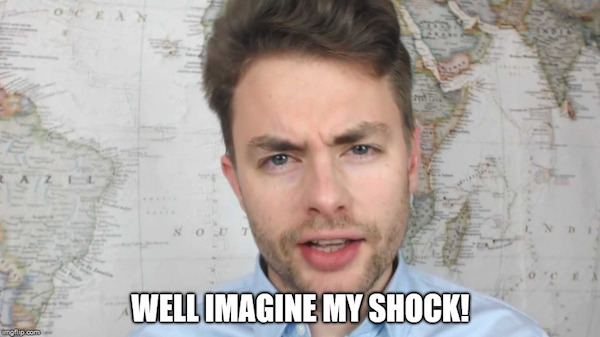 Two women who had been in relationships with Mr. Schneiderman — Michelle Manning Barish, a liberal activist, and Tanya Selvaratnam, an author — told the magazine that he choked and hit them, often during sex, and subjected them to verbal abuse. They said he slapped them so hard that Ms. Manning Barish bled from her ear long after the blow, while Ms. Selvaratnam suffered from episodes of vertigo.

Both said Mr. Schneiderman threatened to kill them, while Ms. Selvaratnam said the state attorney also warned her he could have her followed and her phone tapped.

The women told The New Yorker that Mr. Schneiderman drank heavily, and would often force them to drink alcohol. Ms. Selvaratnam told the magazine Mr. Schneiderman called her his “brown slave,” and forced her to say that she was, “his property.”

If some high-profile person with an (R) after his name did the same thing, do you really think the so-called Social-Justice warriors would let him quietly resign? Or would they set out to destroy him on a personal and professional level?

5. Trump and Schneiderman have had a long running feud. pic.twitter.com/xYNNI9kZkK

As it turns out, Trump’s instincts were pretty good.

Trump is president, and Schneiderman has resigned in disgrace.

Trump has a knack for outliving his pallbearers.