Hey Samantha, that time you called Schneiderman a ‘superhero’ did not age well.

Maybe before a Canadian weighs in as an “authority” on American politics, she should read a book or two about it? On second thought, since she’s walking lockstep with the liberals anyway, it probably wouldn’t make much of a difference.

What she learned too late is that her ignorance and Trump-hating outrage can take her down roads with unintended destinations.

(Let’s start with a screen capture, in case she gets embarrassed enough to delete this tweet.) 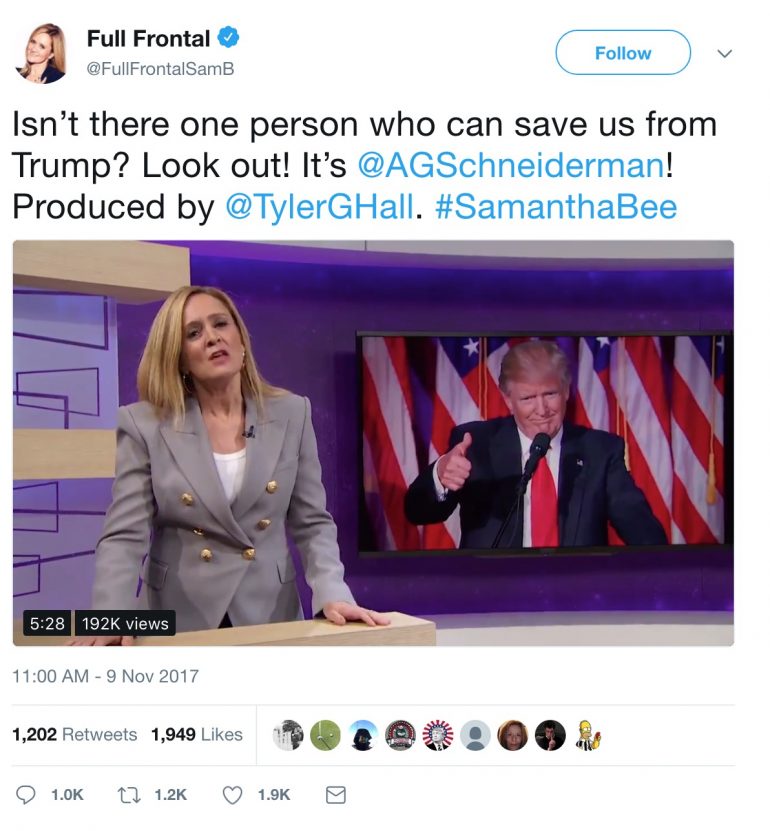 Schneiderman told us he was going to be the Resistance. The First line of defense — against the duly-elected President. So much for Hillary’s much-touted line about ‘smooth transitions of power’ that she supposedly cherishes.

He’s going to hold tyrannical power in check. She dubbed him ‘Schneiderman!’

‘all around the country, a network of attorneys-general who are in the core of the resistance.’

They had a meeting in January BEFORE Trump took office, and ‘had to anticipate what was coming’

Samantha: “You assembled your anti-Trump squad of attorney-generals –”

[Hold on — does that sound like they were actively conspiring against the President even before he took office? Don’t they have some kind of an oath they’re supposed to uphold?]

He bragged about all the things this network ‘beat him’ [Trump] on.

This is an explicit acknowledgment of the very political swamp Trump was sent there to drain. And the NY AG is boldly announcing that THEY are the big critters in that swamp.

(Remember to bookmark that video for the Midterms, so we don’t forget what we’re up against. Now back to Samantha Bee sitting kissing up to Schneiderman.)

And she’s sitting there starry-eyed as this guy who beats on and degrades women will be fighting for her against the great satan … or something.

This is the same guy who just resigned in disgrace because, not only was he accused of being violently aggressive with four different women, but also:

Both said Mr. Schneiderman threatened to kill them, while Ms. Selvaratnam said the state attorney also warned her he could have her followed and her phone tapped.

The women told The New Yorker that Mr. Schneiderman drank heavily, and would often force them to drink alcohol. Ms. Selvaratnam told the magazine Mr. Schneiderman called her his “brown slave,” and forced her to say that she was, “his property.”
Source New York Times

Threatening women by saying that he has the power to kill them, follow them, and tap their phones? Yeah, that’s the kind of guy you want on your side ‘fighting’ alleged tyranny.

And ‘brown slave’? Who even talks that way? Maybe it’s ‘a white liberal elite’ thing.

Way to pick those friends of yours, Samantha! What a FINE judge of moral character you are, by reading backward from the letter after a person’s name, (D) or (R) and judging based on that alone!

That’s worked out SO well, hasn’t it?