Her own attorney has bailed on her, AND Shaun King doxxed an innocent cop with no connection to the story.

For guys like him, everything can be made political.

Shaun King seems to be advocating for an end to the rule of law and having it replaced by some sort of mob rule, trial by media circus. Here’s why that’s a bad idea.

Not only did he take the wrong side of a case, but he DOXXED a cop who had nothing to do with the incident in question. (And like the man of courage and integrity he is… he conveniently deleted those tweets, AFTER the damage was done.)

Here is the apology by the lawyer. 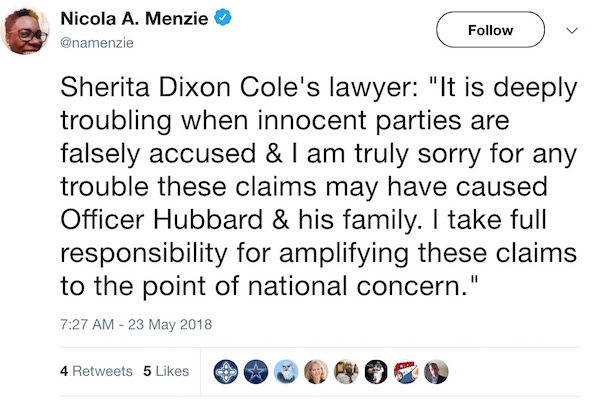 What had been alleged against the cop, before the camera disproved his accuser’s claims?

The woman claimed he was racist and that she had been sexually assaulted. The dashcam said differently.

On May 20, 2018, at approximately 1:32 a.m., a Texas Highway Patrol Trooper observed a 2013 Chevrolet Malibu traveling south on Interstate 35 in Ellis County near U.S. 287. The vehicle was stopped for a traffic violation. Based on the traffic stop, the driver was arrested for driving while intoxicated (DWI). The driver, identified as Sherita Dixon-Cole, 37, from Grapevine, was arrested and transported to the Ellis County Jail, where she was charged with DWI.

Following the arrest, spurious and false accusations related to this traffic stop were made against the Texas Trooper. Upon learning of those allegations, the Texas Department of Public Safety immediately took action to review the video in connection with this traffic stop and arrest. The video shows absolutely no evidence to support the egregious and unsubstantiated accusations against the Trooper during the DWI arrest of the suspect. The Department is appalled that anyone would make such a despicable, slanderous and false accusation against a peace officer who willingly risks his life every day to protect and serve the public.

At the department’s request, the Ellis County District Attorney’s Office has reviewed video of the traffic stop and arrest, and authorized the release of the video. The department today proactively and publicly released the video captured by the Trooper’s body camera, which can be viewed in its entirety.
Source: Blaze

Because someone made defamatory claims about a cop, Shaun King took them as gospel truth. (It’s called ‘confirmation bias’.)

As a result, he defamed someone’s good name. The person he Doxxed wasn’t even the arresting officer. Worse — he wasn’t even from the same county. 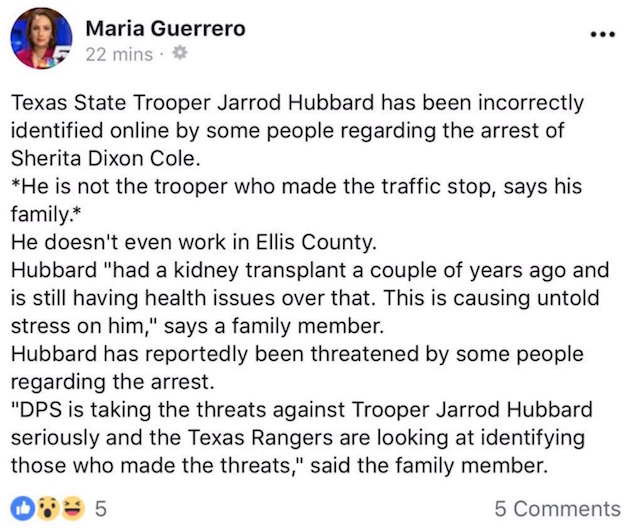 Ok, an innocent guy who is recovering from KIDNEY surgery gets blasted by ‘do-gooder’ Shaun King and his gazillion trolls for something he had no part in.

And threats were made against him.

This is NOT the behavior of a man who is virtuous, wise, or the least bit concerned about justice.

People like YOU are why we have courts, trials, and the presumption of innocence…

Should the innocent officer he doxxed sue for defamation?