If Hillary is such a ‘strong woman’ why does she have so damned many excuses?

Feminists — at least the previous generation of Feminists — once told us that women could do anything as well as a man. When they did well, it was because they were competent and hard working.

Failure was something you dusted yourself off from, learned your lessons, improved your tactics, and came back twice as strong.

That was — and is — what a strong woman can look like in the workplace.

So how the Hell did this entitled, whiny — let’s blame men for all my problems — sissified political horse trader get chosen as the ‘avatar’ of strong women everywhere?

Hey, strong women — are you feeling cheated, yet?

Strong women don’t let their husbands humiliate them in public — repeatedly — not only to carry on like nothing happened but setting out to personally destroy any other women who bring legitimate complaints against her husband’s sexual mistreatment of them in the process.

Truly strong women are long on responsibility, and short on blame.

If they succeed, it’s because they (and, usually, the strong team they’ve gathered around themselves) have worked hard to see a result through to completion. If they fail, the truly strong women don’t blame their team or the weather, or bad luck. They learn their lessons and move forward to the next challenge in life.

Notice, Hillary is in Australia, speaking ill of America, in order to prop herself up. And when the interviewer (Julia Gillard, Australia’s first Prime Minister) compared 2016 to the ‘Salem witch trials’ Hillary agreed with it. If you ask her, the problem, you see, is the American people. You remember, that ‘basket of deplorables’.

Contrast that to Trump, who sees good in the American people, and wants to create conditions where the natural greatness of Americans can be unleashed. #MAGA

There is still a very large proportion of the population that is uneasy with women in positions of leadership, and so the easiest way to kind of avoid having to look at someone on her merits is to dismiss her on her looks.

Oh, ok. It was Hillary’s looks that were unfairly judged. Care to comment on those naked statutes of Trump? Or the constant references to his weight, or the orange cast to his skin?

She just can’t accept that it wouldn’t change anything if she looked like a runway model or a roadkill raccoon, it was her personality, her ideas, her corruption, and her (lack of) character that Americans ultimately rejected.

When the cries of ‘lock her up’ were equated to Salem, rather than correct her on how absurd the comparison was, Hillary leaned right into it.

There is this fear, there is this anger, even rage about women seeking power, women exercising power and people fall back on these attacks like you’re a witch or you should go to prison. It’s not a majority, thank goodness, it’s not, but it’s a very vocal minority at least in my country. And sometimes these tropes are very much part of the press coverage.

So, let’s get this straight.

Isn’t it HILLARY who’s ‘falling back on attacks’ (and excuses) after all those pretty words about ‘smooth transitions of power’ blew up in her face when she learned it wasn’t HER that would be following Barack into the White House?

Maybe saying she ‘overheated’ when she was dumped into that van in 70 degree weather hurt her credibility. Maybe calling that cough ‘allergies’ and then ‘pneumonia’ reinforced the belief that she is willing to lie about small things, and can’t be trusted with big things.

If we REALLY wanted to hammer her on looks, we might point out the fact that people are speculating about whether or not Ms Outrageously Healthy, no really, is wearing a back brace under in her clothes. 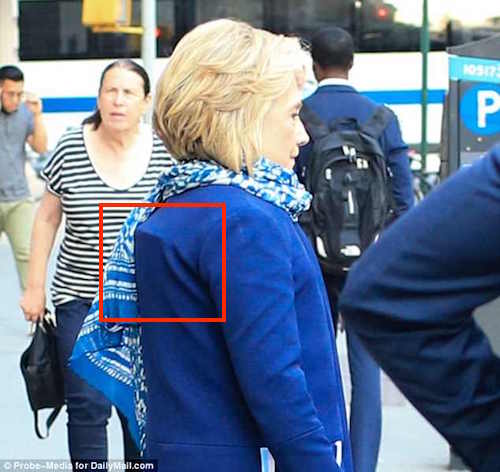 Watch the video for yourself. She only gets stupider from there.