You’ve gotta be ‘progressive’ to not have seen this backlash coming. And there is sure to be more like it.

Can you imagine the reaction if Baden-Powell and the other founders of BSA had lived to see their organization sink into the swamp of political correctness?

In the name of being ‘inclusive’ they have done away with the original aim of harnessing raw adolescent masculinity and connecting it to character and competence.

Before ‘toxic masculinity’ was ever a term, this was its remedy.

And now it’s decided to become just another community group hijacked by a ‘progressive’ ideology.

Which is why the Mormons are turning their backs on it, and creating an equivalent program for their half-million kids.

The Mormon church announced Tuesday it will sever a more than century-old tie with the Boy Scouts of America and transfer its remaining 425,000 boys in the program into a gospel-focused youth group it is developing.

The church’s announcement follows the Boy Scouts’ unprecedented decision in 2015 to allow gay troop leaders and last year, to allow girls in its ranks – both seemingly at odds with the conservative beliefs of the Mormon church.

Last week the BSA announced it will drop the word “Boys” from its name to reflect the inclusion of girls.
Source: FoxNews

They tweeted their press release:

The Church has announced a new approach to replace all existing activity programs for girls and boys, young women, and young men, beginning in January 2020. https://t.co/kc008dfoue pic.twitter.com/F9oR8MsdGa

Do you think a drop of membership of a HALF-MILLION people might have any impact on the organization at all?

And that’s just the Mormons.

How do you think other Conservative groups, including churches, will feel about this new development?

The memes are already swirling: 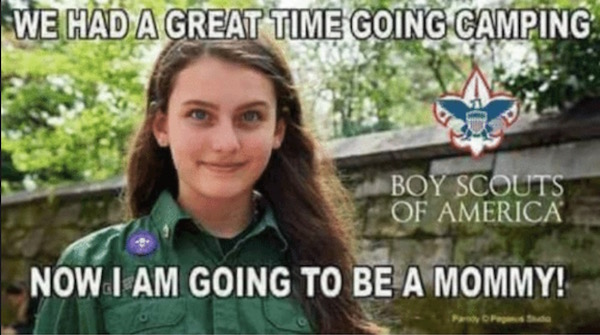 Welcome to the world of unintended consequences.

Maybe they forgot membership was VOLUNTARY.