The First Lady’s message to the Media (D) was absolutely perfect.

The White House announced on Tuesday the launch of the First Lady’s ‘Be Best’ program that encourages adults to teach children how to be good citizens.

We’ve seen how traumatized teens have been used as political pawns by the Left to push gun control.

After the Media (D)’s coverage, however, it would seem that her undertaking is both a noble and ambitious goal.

Much of the coverage accused the First Lady of ‘copying’ material that was distributed by the Obama Administration.

Even this ‘Pastor’ with over 100K followers dumped on Melania calling her a thief:

Dear Everyone in the Media,

Why are you covering @MELANIATRUMP's/@FLOTUS' #BeBest campaign as if it's anything but a complete act of theft?

We're trying to have a society here, and iIf would you stop normalizing stealing—that would be a huge boost.

This ‘comedian’ said that she ‘cheated’ by copying the FTC document:

How sad is it that Melania can cheat off the smart kid and STILL fail the test? #BeBest #TuesdayThoughts

Stephanie Grisham, the first lady’s spokeswoman, took the “opposition media” to task on Tuesday. She says in a statement that journalists used a day meant to promote positive efforts on behalf of children to lob “baseless accusations towards the first lady.”

Grisham said Monday that the Federal Trade Commission asked Mrs. Trump to include the booklet in her materials.

Watch Melania highlight one of the kids that is making a difference:

During the #BeBest launch, @FLOTUS told the story of a kind student who's already making a difference on the playground. pic.twitter.com/b71G6NvTic

The Office of the First Lady shot back saying that the Media (D) should ‘Be Best’ at their job by fact-checking and focus on the kids.

Here is the statement released by the Office of the First Lady: 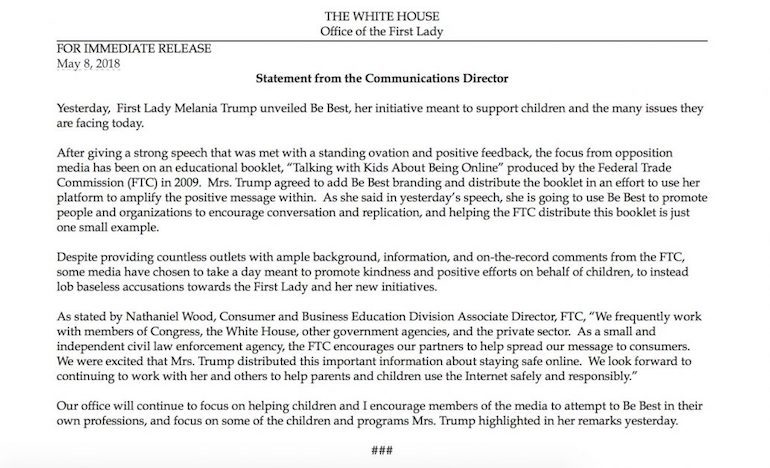 Our office will continue to focus on helping children and I encourage members of the media to attempt to Be Best in their own professions, and focus on some of the children and programs Mrs. Trump highlighted in her remarks yesterday.

Way to kick back at those fact-averse haters!