And California… And Arizona… And anywhere else that doesn’t snow six months of the year.

They SAY they’re ‘boycotting’ America. We’ll see if they mean it when that first snowfall comes.

And what, exactly, are they protesting against? Do even THEY know? Or are they just following the manufactured outrage of their tinkerpot Prime Minister and Canada’s State-owned news media?

They’re upset over what, exactly? Have they seen the stats cited by the Federalist Papers? 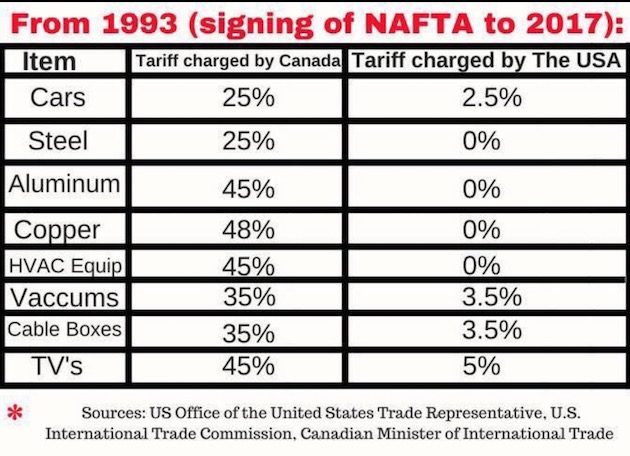 What a ‘rough’ ride those Canadians are getting over NAFTA!

Even Reuters doubts they can sustain the outrage.

Canadians outraged by U.S. President Donald Trump’s attack on their prime minister have called for a consumer boycott targeting the United States, but indignation may be hard to sustain in a nation enamored by U.S. popular culture and larded with American goods.
[…]
But while Canadians will fight to a polite death for the right to consume homegrown beef, beer and maple syrup over what they view as inferior American alternatives, any move to mount a broad boycott could be tough going in a country that reveres U.S. popular culture and consumer goods over all others.

“To suggest Canadians are going to stop drinking Coke and Pepsi is a bit of a stretch, given we are so enmeshed in U.S. consumer culture. A bottom line impact is not likely to occur,” said pollster Nik Nanos.

“That said, this is going to be a massive headache for U.S. companies doing business in Canada, both from a public relations and consumer relations perspective.”

How worried are you about this boycott threat?

How worried are you about this boycott?