The historic meeting took place and now the pundits from both sides are weighing in.

The right sees this as the beginning of peace on the Korean peninsula.

But the left says that President Trump is a ‘chump’.

As a matter of fact, George Stephanopoulos ‘accidentally’ said it on live television.

(That was just an accident, right?)

ClashDaily’s Big Dawg, Doug Giles, has his own take on the situation.

Here’s how the ‘right’ sees the situation:

Kim Jong-un affirmed an ‘unwavering commitment to complete denuclearization of the Korean Peninsula’ in a signed document on Tuesday, President Donald Trump says.

‘We’re prepared to start a new history, and we’re ready to write a new chapter between our two nations,’ he told a packed room of reporters at a press conference in Singapore.

President Trump discussed the 4-point document that they signed.

‘I believe he’s going to live up to that document,’ Trump said. ‘Our eyes are wide open, but peace is always worth the effort, especially in this case.’

The U.S. president told reporters that he became convinced that Kim was serious when he agreed to dismantle a sophisticated missile engine testing site. ‘We’re much further along than I would have thought.’

At the same time, he agreed that there are no guarantees that Kim will tear apart what he called ‘a very substantial arsenal.’

‘Can you ensure anything?’ he asked. ‘All I can say is: They want to make a deal. … Can anybody be certain? But we’re going to be certain soon because the negotiations continue.’

And then with a sly smile, Trump joked: ‘I don’t know that I’ll ever admit that, but I’ll find some kind of an excuse.’

Here is a copy of the document that was signed. 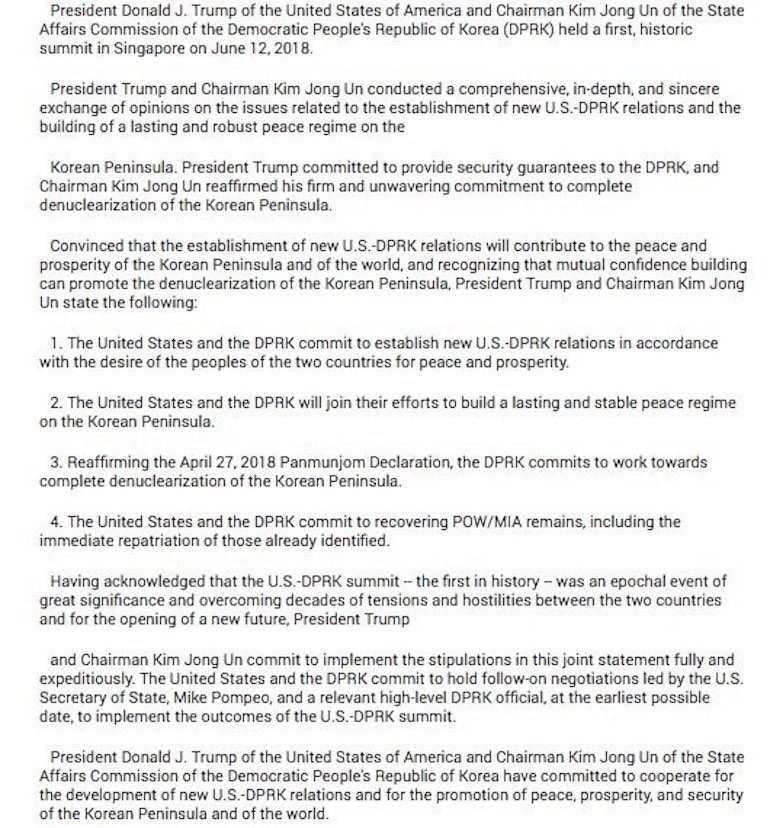 And the ‘left’, well, they see things differently.

One left-wing site says that Kim Jong-un was just ‘toying’ with President Trump.

At the last minute, Kim Jong Un announced that he would be departing Singapore just seven hours after his meeting with Donald Trump. This ensured that substantive negotiations wouldn’t be able to take place, and that the two would end up departing with little more than a handshake and a photo op in place. Of course the photo op was all that Kim wanted, and he had no intention of giving up his nuclear missile program. This means Trump will get nothing tangible out of this summit.

And then, here’s what they said about you, Dear Trump Supporter:

Trump, will, of course, call it a victory anyway. His political base has no connection to facts or reality to begin with, so it won’t matter to them that he will have accomplished few or none of his goals with North Korea. What will matter is how everyone else perceives it. As Palmer Report has long explained, Trump’s base is no more than around 15% to 20% of the country. The rest of his approval rating number is made up of people who are not in his base, who have never loved him, and are still on the fence about him because they hear the claims both sides and aren’t sure what to believe.

So, Readers, what do you think?

Clash Poll: Is The No. Korea Peace Deal Legit?