The left is losing its mind over a photo of 4-year old Prince George.

There was outrage, I tell you! Outrage!

Heaven forbid that a nearly 5-year old boy that has a real love for law enforcement would play with a gun.

Funny how there was no outrage on the left when the young prince was labeled a ‘gay icon’ and when a so-called ‘minister’ urged Christians to ‘pray for Prince George to be gay’.

Yeah, I don’t recall the outrage from the left at all there.

But the boy does what so many boys do and everyone goes crazy!

Here is the ‘offensive’ imagery: 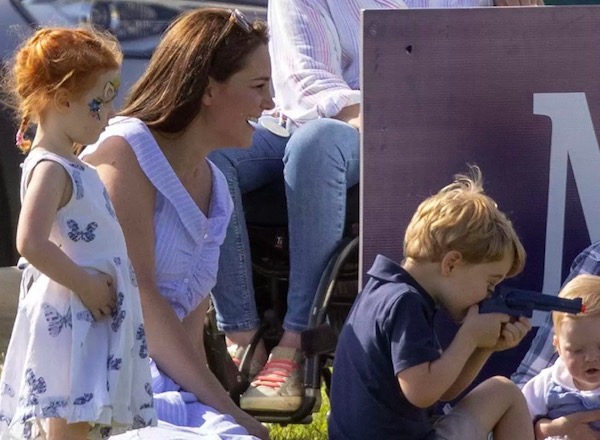 Oh, no! Another youngster is doing the same thing! 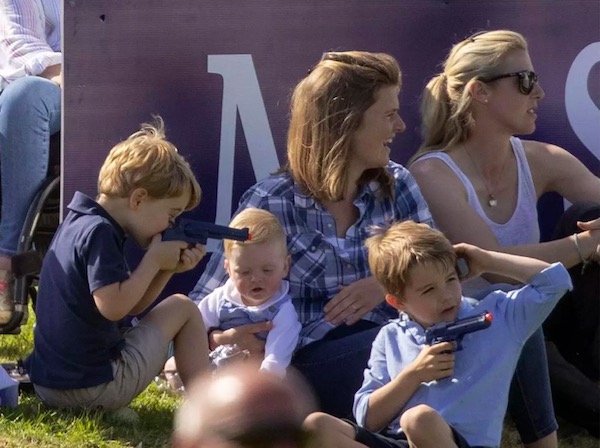 The headline in the UK Independent is, ‘SHOULD CHILDREN BE ALLOWED TO PLAY WITH TOY GUNS? EXPERTS WEIGH-IN FOLLOWING OUTRAGE OVER PRINCE GEORGE PHOTOGRAPHS’

Prince George was pictured playing alongside Princess Charlotte and The Duchess of Cambridge yesterday, but not everyone was happy about the four-year-old’s choice of toy – a pretend gun.

The Duke of Cambridge was playing in the Maserati Royal Charity Polo Trophy at Beaufort Polo Club in Tetbury, Gloucestershire, on Sunday afternoon.

The young prince, like many other preschool boys, is fascinated with police officers.

Images from the event captured Prince George playing with a toy gun, knife and handcuffs which, given the youngster’s known interest in the police, came as no surprise to some.

On a visit to Finland last November, William presented Father Christmas with a Christmas list from George, which featured one request – a toy police car.

Similarly, at a reception in March celebrating the Metropolitan Police, one officer joked that William’s children could join the police cadets, to which the Duke is said to have replied: “Well he does like the police at the moment.”

But… this is England, where guns are frowned upon.

It’s not a joke some people lose their lives because their children thought they played with a toy and it was a real gun !! pic.twitter.com/IBJqQrXnef

This isn’t okay anymore… My American side here, biased maybe b/c of everyday #gunviolence in USA,but my British side agrees. No child in this day and age should look at any gun as a fun toy. This looks far too real. .(And I LOVE Prince George, don’t get me wrong!) @teamtrace pic.twitter.com/UEqtFi5WTH

Here’s why the sight of #PrinceGeorge playing with a toy gun is triggering for some of us. Black mothers in the US have to teach their sons not to play with anything (a toy gun, a cell phone, etc.) a policeman could claim looked like a real gun. Their lives depend on it.

And worst of all, it’s promoting ‘gender stereotypes’:

Prince George plays with a toy gun. His sister plays with her sunglasses. Nothing stereotypical about that is there …?
More pics from the charity polo match here https://t.co/bkvEIUcKFV pic.twitter.com/XC88DuqjOG

If that’s the reaction for a simple toy gun, you’d better not show those leftists a toy commercial from the 1960s!

The Independent decided to ask the experts what they thought.

I know that this is anecdotal evidence, but as the parent of two boys, I can attest that they both made guns out of everything — broken branches, Lego, hockey sticks, their sandwiches.

It’s not uncommon for children to play with pretend pistols and western shooters, but is a fascination with military hardware damaging to little ones?

And, should we be letting them play with toy guns in the first place?

The experts think of the children. Here’s what they had to say.

According to some experts, this type of creative play is necessary and can even prove helpful in terms of child development.

“I understand why gun play worries parents, however research shows that any aggression demonstrated while engaging in ‘war play’ is not carried over into real life. ie: kids who play with guns become no more violent than those who don’t,” Sarah Ockwell-Smith, parenting expert and author of The Gentle Discipline Book told The Independent.

“Pretend play is an important way for children to make sense of the world; in an age where guns are becoming more prevalent, gun-play helps them to process what they may see on the news, or indeed be subject to in real-life in a safe way.

Apparently, my own parenting experience is not uncommon.

“That said, even if parents restrict gun-toys, it incredibly likely that children will fashion their own, from a stick for instance. For this reason, combined with the evidence, I see no issue with letting children play with guns and happily allowed my own children to do so.”

Parenting coach Bea Marshall agrees, adding: “In my experience of raising my own sons, and also working with families around the world, one thing I have learned is that many children will find a way to create a gun no matter how hard you try to keep guns out of their world. Sticks, lego, wooden spoons and more are often turned into a gun and the intention behind it is completely innocent.

“As guns are a very real aspect of the world we live in today, whether the military, online gaming, movies or sport, I encourage parents to be part of their child’s exploration of guns.

“Guns only become ‘bad’ when we give them that meaning. In doing so we introduce fear and control into our relationship with our children rather than focusing on connection and joy.

“As your child grows up they will naturally learn more about the various uses and consequences of guns and the connection you have created with your child will allow for deep and insightful conversations about this knowledge.”

So, to all the leftists out there freaking out about Prince George playing with guns — shut it. He’s four.