Two years of character assassination and coordinated leaks and this is all they have to show for it? No wonder they’re so angry!

Could that have anything to do with their plummeting ratings?

Donald Trump is more popular among members of his own party than any president since the Second World War except for George W Bush, whose support surged after the September 11 terrorist attacks.

That puts him ahead some pretty significant names in own-party support at the 500 day mark. 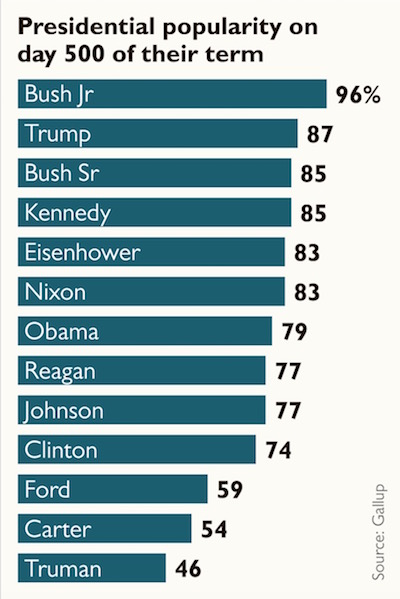 Bush, obviously, got the bump when the entire country rallied together in the post 9/11 response.

Nor did Bush have to contend with an FBI that was tweeting ‘Viva Le Resistance’ in defiance of the madate of the American Electorate.

Trump SAID he’d do a lot of winning, right? Turns out he wasn’t kidding.

Time to celebrate a little. Cue up the song!

(We’re pretty sure Emma would HATE that we’re using her cut to do this, too! Which is why we like using this one.)

What will Democrats say about these numbers?