President Trump was mocked for tweeting out that The Media (D) has been pushing conspiracies about the First Lady. We’ve got those stories right here.

For the past week or so, the Washington Media (D) has been spreading speculative stories about the ‘disappearance’ of Melania Trump.

On May 14, the First Lady underwent a minor kidney procedure, and she hasn’t made many public appearances since. Rational people would call this ‘recuperation’, but not the Media (D). There have been some pretty wild stories spun in major news outlets.

CNN’s Brian Stelter was quite concerned about the First Lady’s whereabouts.

The Fake News Media has been so unfair, and vicious, to my wife and our great First Lady, Melania. During her recovery from surgery they reported everything from near death, to facelift, to left the W.H. (and me) for N.Y. or Virginia, to abuse. All Fake, she is doing really well!

…Four reporters spotted Melania in the White House last week walking merrily along to a meeting. They never reported the sighting because it would hurt the sick narrative that she was living in a different part of the world, was really ill, or whatever. Fake News is really bad!

Brian Stelter then said that the President was calling ‘random Twitter commenters’ the ‘media’.

Trump is conflating random Twitter commenters with "the media" here. A common tactic of bad faith critics. But disappointing to see POTUS do it. pic.twitter.com/7tWObMmUdD

The New York Times even ran a completely tone-deaf headline that read, ‘Trump Defends Wife, Melania, and Spreads Conspiracies About Her in the Process.‘

I beg your what?

This little headline makes it sound like President Trump is at fault for the conspiracy theories.

President Trump, who has long reveled in conspiracy theories, spent at least part of Wednesday morning lashing out at the news media about its coverage of the first lady, Melania Trump, while in the process repeating the kind of unfounded rumors about his wife that would normally attract legal action from him and his notoriously litigious family.

Here at Clash, we read the New York Times so you don’t have to. You’re welcome.

Here are 8 specific examples of the Media (D) getting the ‘Missing Melania’ all wrong:

1. We go back to the New York Times and the article, Melania Trump Returns to the Public Eye (Sort Of).

The article claims that the return of the First Lady is suspect.

On the 25th day of a much-discussed absence from the public eye, the first lady re-emerged.

Weeks ago, Melania Trump essentially vanished from view after undergoing what her office described as a successful treatment of a benign kidney condition. On Monday, she reappeared on the president’s schedule and joined him at a reception for military families.

But Mrs. Trump’s scheduled appearance was not open to the press, and was unlikely to calm rampant speculation about why she has not been seen in public in over three weeks. It is an unusual stretch for one of the most visible women in the world and, according to historians, it is the longest break anyone has taken from the role in modern memory.

The article gets even more tinfoil hat-ish with their claim that perhaps the issues surrounding her surgery is more nefarious than a ‘benign kidney condition’.

Mrs. Trump’s absence came abruptly, and at a time when she seemed to be getting used to standing firmly in the spotlight. She was admitted to the hospital just days after the kickoff of Be Best, her official platform. In the weeks before, the first lady had organized a state dinner with France and saw her poll numbers rising. Then she vanished — not an easy feat for someone whose every public move has been dissected on social media.

2. The Root suggests it wasn’t Melania at all, it was a body double.

In the article attributed to Stephen A. Crocket, the Root’s Senior Editor, Melania’s name is used in scare quotes.

A woman with the facial structure and permanent scowl worn by first lady Melania Trump made an appearance Monday evening with her husband and legal captor, Donald Trump.

The woman who answered to the name Melania was alongside the president during a ceremony to honor Gold Star families. While many, including this writer, believe that the real Melania had enough of the president’s blowhard, deceitful tactics and dug a tunnel out of her private bedroom to escape, this was the first public appearance for ‘Melania’ in 24 days.

3. A senior writer at Rolling Stone tweeted out that Melania may be missing because she’s being abused.

I wish that I didn’t suspect that the prolonged, poorly explained public absence of Melania Trump could be about concealing abuse. I wish that it was a ludicrous prospect. I wish that the @POTUS wasn’t a man with a history of abusing women, including those to whom he is married.

4. Politico suggested that the White House was stoking conspiracy theories but then does exactly that.

Notice that the only thing in scare quotes is the part about Melania’s kidney condition.

She’s left the White House and moved back to New York City.

She’s holed up with the Obamas, working on a tell-all book about her husband — unless she had a secret nip and tuck, in which case she’s just healing.

During the two weeks since Melania Trump returned to the White House following what was described as a relatively minor surgery — a period during which she has been absent from ceremonial events like a Memorial Day wreath-laying at Arlington National Cemetery — conspiracy theories have flooded in to fill the void of information about the first lady’s health, and whereabouts.

The White House has released almost no information about Trump’s condition since May 14, when her spokeswoman said the first lady was undergoing a routine embolization procedure at Walter Reed National Military Medical Center ‘to treat a benign kidney condition.’

5. A Huffington Post writer asked some ‘legitimate questions’ on Twitter like, ‘Did she have a breakdown?’, ‘Is she getting plastic surgery?’, and ‘Was the whole thing a scam?’

Where is @FLOTUS? And why was she in the hospital so long? Is she sick? Did she have a breakdown? Did @POTUS force her to get plastic surgery? Was the whole thing a scam? This is not a joke. These are legit Q’s abt America’s First Lady that remain unanswered. #Melania #Trump

6. In the midst of the ‘Where’s Melania?’ speculation, David Frum, Senior Editor of The Atlantic,  posted a convoluted tweet that revealed his never-Trump side that’s always just under the surface.

Just kidding, it’s always there right up in your face.

He seems to have implied that Melania may have been assaulted by the President.

Suppose President Trump punched the First Lady in the White House (federal property = federal jurisdiction), then ordered the Secret Service to conceal the assault. POTUS has Article II authority over Secret Service. Is that obstruction? Under Sekulow/Dowd, apparently NO

7. Baltimore Sun reporter, David Zurawik, appeared on the inappropriately-named Reliable Sources with Brian Stelter on CNN and said that the tweet from Melania’s account ‘didn’t sound like her.’

CNN devoted a whole segment to the first lady, in which David Zurawik of the Baltimore Sun implied that Melania Trump’s Twitter account was being “guided” by someone other than the first lady after a tweet went out from her account poking fun at media for obsessing about her.

In the same segment, Stelter says there are a lot of unanswered “questions” about Melania’s absence from the public eye and stay at Walter Reed — implying there was something suspect about her medical condition.

8. And of course, our buddy, Brian Stelter’s obsession with where Melania is.

Oh, yes. The guy that says it’s just ‘random Twitter commenters’ unironically sent out this image in the Reliable Sources newsletter on June 3: 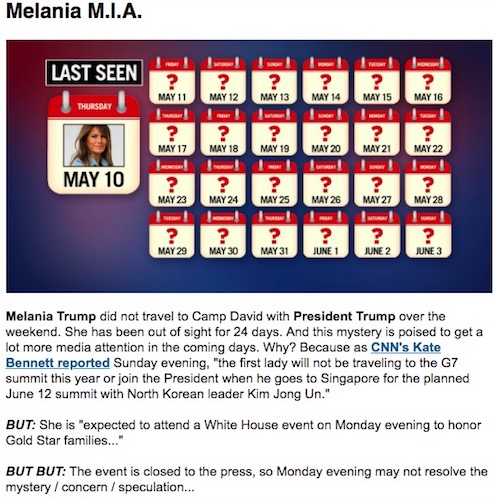 Fortunately, he was roundly mocked on Twitter for the nonsense.

Stelter’s obviously with the right network.

He pushes a whole heap of crap on his show.