Mom and Dad DID tell you not to believe everything you see on TV, right? Increasingly, that means the news, too. Here’s yet another example.

The Media(D) knows, through trial and error, that some strategies are more effective than others.

For example, having somebody stand up and explain why the very latest Progressive ideology must be uniformly embraced is not very persuasive.

But let a single dead toddler wash up on the shore of the Mediterranian and suddenly all the world gives approval to Millions of foreigners swarming into Europe without any consideration about what the net economic or cultural impact of those levels of population movement will be in Europe and beyond.

Here’s a photo that made so many waves in social media and the news:

This is what happens when a government believes people are “illegal.”

This is where some savvy internet kid would smirk and laugh… ‘Big If True’.

Which is a nice way of saying…

People went to the internet, started looking at old photos with cages, and wouldn’t you know it…

Did YOU see what they saw? Did you win the Internet Propaganda edition of ‘Where’s Waldo?’

Of course you did.

Even Snopes had to admit the story was bogus.

And that’s an effort they tend to reserve for trying to discredit ideas on the right.

You’re not going to dismiss this as a stand-alone ‘mistake’, are you? 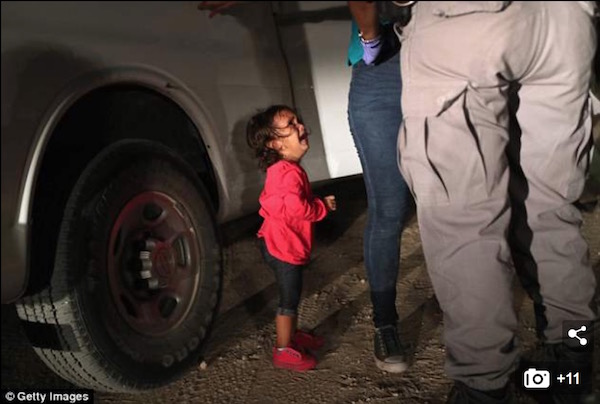 Being torn from her mother, look how EEEVIL Trump is, right?

Except that it never happened. Not even close. It was a lie.

Denis said his wife and daughter were never separated by border control agents and remain together.
[…]
For many the photo summed up the cruelty of Trump’s ‘zero tolerance’ policy towards migrants which has caused 2,300 children to be separated from their mothers and fathers.

But Hernandez said that he had heard through family members that his wife and daughter had not actually been separated.