Colin Kaepernick’s lawyers are arguing that there was ‘collusion.’ No, that’s not a joke.

The former NFL player’s lawyers have been hinting at this for a while, and it looks like they’re going to drag the President of the United States into his lawsuit against the NFL.

Lawyers for Kaepernick allege that NFL owners feared a negative tweet by President Trump and therefore didn’t sign him.

The owners were ‘colluding’ with each other to keep Kaepernick out of the league because of his anthem protest.

It’s not just Trump that they’re seeking to subpoena, they’re going for everyone associated with Trump.

Kaepernick’s legal team is expected to seek federal subpoenas in the coming weeks to compel testimony from Trump, Vice President Mike Pence and other officials familiar with the president’s agenda on protesting NFL players, sources with knowledge of the quarterback’s collusion case against the NFL told Yahoo Sports.

The aim will be a dive into the administration’s political involvement with the NFL during Kaepernick’s free agency and the league’s handling of player protests, sources said. This after recent disclosures that multiple owners had direct talks with Trump about players kneeling during the national anthem. The content of those conversations between Trump and owners – as well as any forms of pressure directed at the league by the administration – are expected to shape the requests to force the testimony of Trump, Pence and other affiliated officials, sources said.

It’ll be work for the lawyers to navigate the collective bargaining grievance rules to inject the President of the United States into the workplace dispute, and they’ll have to fight Trump’s lawyers who are already fighting subpoenas from Special Counsel, Robert Mueller.

And then, there’s the theory that Kaepernick just isn’t that great as a QB.

Pro Football Focus gives a pretty fair assessment of Kaepernick according to the stats.

Kaepernick is still unemployed and is unlikely to be named a starter wherever he lands. As for my own personal opinion on Kaepernick, I think he was once an average NFL starter, but has been playing at a backup-caliber level the past two seasons.

Among all 33 quarterbacks to play at least 500 snaps, Kaepernick was our worst-graded quarterback in 2015. In 2016, he ranked seventh-worst of 30 qualifying. Prior to that, he hovered around the NFL average.

Don’t forget to get one of these: 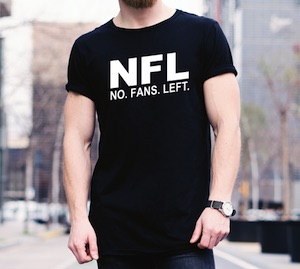