She’s back and as vile as ever.

Actually, much to our dismay, Kathy Griffin never really left.

She apparently hasn’t learned anything after her ‘Trump beheading’ stunt.

Back in May 2017, the irritating and seriously unfunny Griffin made headlines for a stunt where she held up what looked to be President Trump’s bloodied, severed head in a replica of an ISIS-style propaganda video. She even wore a pussy bow blouse.

At first, she apologized for the stunt when the backlash hit her, then she took it back and claimed that she was the victim.

Now she’s back and taking a shot at the First Lady in a profanity-laden tweet.

It’s for the same issue that ‘Alleged Humorist’, Samantha Bee, attacked Ivanka Trump for — the Obama-era policy of taking illegal immigrant children from their parents at the border.

Kathy Griffin unleashed a profanity-laced tirade against Melania Trump shortly after the first lady released a statement about the separation of immigrant families along the US-Mexico border.

The first lady’s spokeswoman Stephanie Grisham said in a statement to DailyMail.com, CNN and other outlets that ‘Mrs Trump hates to see children separated from their families and hopes both sides of the aisle can finally come together to achieve successful immigration reform’. 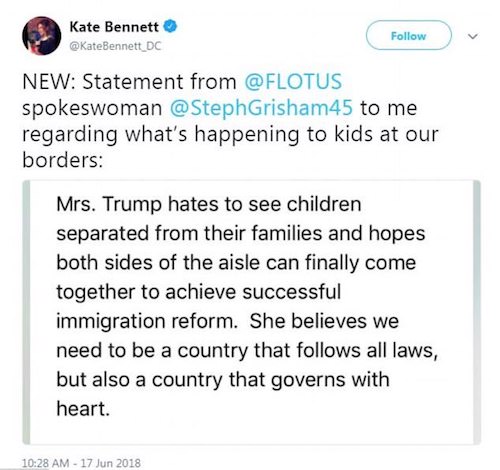 In response to that statement, Griffin had a few choice words of her own.

‘F**k you, Melanie. You know damn well your husband can end this immediately…you feckless complicit piece of s***,’ the comedienne tweeted Sunday morning.

When Griffin misspelled the first lady’s name, she was alluding to a May tweet from President Donald Trump in which he misspelled his wife’s name as ‘Melanie’ as well as when Samantha Bee called Ivanka Trump a ‘feckless c***’ on her show last month. 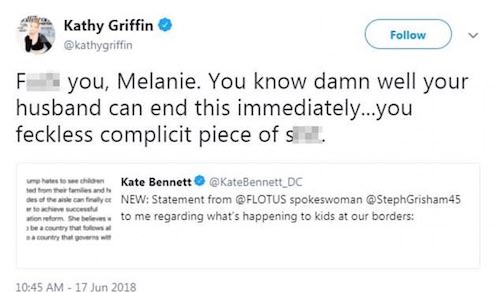 I dunno, I think you’re better at being a b!tch than at being funny…

And I’ll bet she calls herself a feminist.

I guess that’s why conservative women and anyone with the last name ‘Trump’ is fair game for her attacks.