In her defense, she could never have expected CNN to ask any questions as though they were real journalists, could she?

But even if it was one of those ‘stopped clock right twice a day’ moments, this question caught the Senator completely flat-footed.

It was a ‘battle of the Baldwins’. CNN’s Brooke versus Senator Tammy.

Democratic Sen. Tammy Baldwin (Wis.) hemmed and hawed her way through the questions, very clearly trying to wriggle her way out of them. She was contracting herself in the process.

She tried to go to the talking points.

You know, on this issue that we get into a moment where we are making progress and then when it stalls, we turn around. I think we all need to continue to be focused on it and press it through,” she said. “The American people need confidence that we can solve problems. Nobody believes that we have an immigration system that works. It is broken. It needs fixing. But we’ve just got to resolve to do that

But in a ‘random act of journalism’ Brooke didn’t let her off the hook so easily, asking whether Tammy spoke up in 2014 when we were seeing pictures like this AP picture associated with a 2014 story: 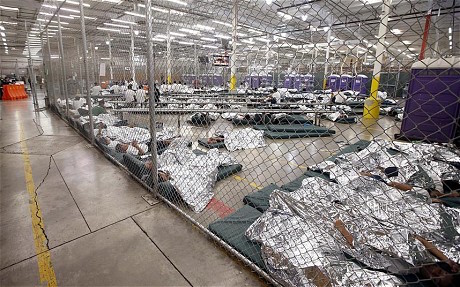 The kids are wrapped up like baked potatoes… in a published story from 2014.

It wasn’t a secret. But then again… we had a Democrat President then. And we’ve already seen the difference in how media treats democrats and republicans. (Like the retraction given by ABC after claiming in their Chiron that Manafort plead guilty to 5 charges of manslaughter. Oops.)

You know, in numbers of cases, usually, I remember a constituent who was in detention at the border, arguably very inappropriately, and we, you know, we raised our voice in that instance and many others,” the senator said. “But that’s—we’ve got to do this now in unison. It’s not enough to do it case by case, for a senator or House member by House member. We’ve got to resolve to fix this issue.

This “one case”.
No, wait that’s too specific … “many others”. (Oh, please don’t ask me for any details)

Now let’s throw it back to Trump, quick before anyone notices.