President Trump had a fantastic time in Duluth, MN last night. For those of us watching, this was definitely a highlight of the evening.

A couple of protesters managed to make it into the Trump Rally in Duluth.

They were both taunted by President Trump.

Trump mocked the first protester using a similar vein of mockery as he was escorted out of the arena, shouting ‘Goodbye darling!’

‘He’s going home to his mom. Say hello to mommy. And tomorrow the fake news will say “massive protest at the Trump rally.”’

The second protester held up a photo of Trump standing beside infamous billionaire and pedophile, Jeffrey Epstein.

Epstein was convicted and spent 13 months in prison for soliciting prostitution from a 14-year old girl.

President Trump’s comments to this protester centered around his hair.

‘Is that a man or a woman?’ the president asked the crowd about the protester, who wore his hair in a ponytail. ‘Because he needs a haircut…I couldn’t tell.’
Source: Daily Mail

The Media (D) and all the Trump-haters constantly mock the President’s hair.

Yet, POTUS has a great sense of humor. He even said, ‘He needs a haircut more than I do!’

Trump as a protester is forcibly removed from Minnesota rally: "Was that a man or a woman? Because he needs a haircut more than I do" pic.twitter.com/5QOc3M9lXM

That, my friends, is comedy gold!

What is the deal with that hairstyle?

Is he heading out later to his ballet recital?

Do these people not have friends to tell them that they look like douches?

Well, you don’t have to befriend these soy latte sipping, hipster dandies, but you can tell them what you think of their hair without saying a word.

Is it a Man-Bun or is it a Douche Knot?

Gents, you can let your fellow males know that you wouldn’t be caught dead with your hair like that. 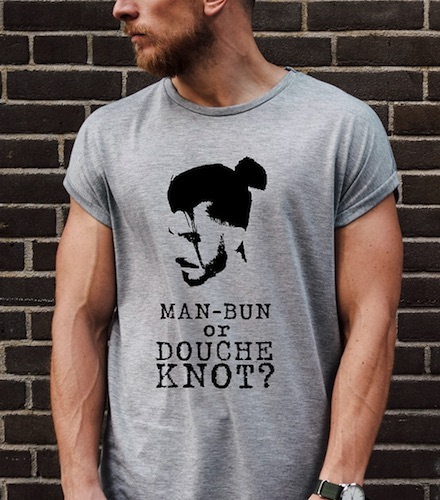 And Ladies, you can be clear that this ain’t the kind of man you’re looking for: 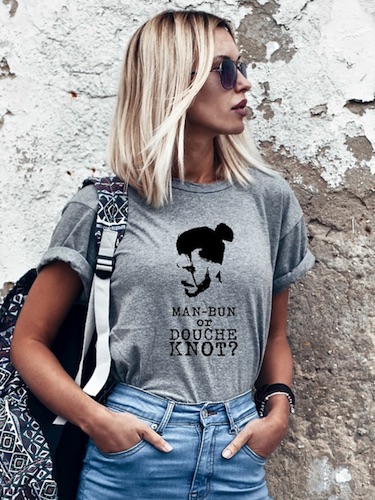