The older I get the less tolerant I become of stupid things, and the more vocal in opposition. Like many personality traits, this has the potential to be a strength or a weakness. Specifically, I’m talking about when one person or a group representing a small minority ruin it for the rest of us.

Exhibit A:
My group of friends and their families hold an annual cornhole tournament in the Open Common Area (OCA) of our neighborhood, usually on a Sunday, and replete with costume themes, beer, prizes, and a donation to a local food shelter. Last year, a neighbor whose house backs to the OCA complained about the noise, accused us of being drunk, disorderly, and lewd, and called both the local sheriff and HOA president. Since this is a family affair with children of all ages, we behave ourselves, so no citations were issued and no warning given. You’d think that would be the end of it.

Because this one resident complained – did I mention he physically threatened at least three of my friends (one of them a woman)? — new HOA rules have been put in place where we must put down a $1,000 damage deposit, $50 registration fee, and must “apply” for a permit to play cornhole. I won’t bore you with the rules but if 25 people or more gather in the OCA for any reason, the new rules apply.

This is laughably unenforceable (“Gosh, three groups of 24 randomly met in the area, and we just decided to strike up a game. Yes, throw me a beer.”). At an HOA meeting where we were able to voice our concerns, a smarmy member on the Board of Directors told us, “All resident complaints need to be heard.” Having been a member on the same Board, I replied, “Correct, but not all complaints are legitimate.”

Exhibit B:
Did you know cheering your kid on from the sidelines is frowned upon?

Real Colorado and Colorado Soccer Association are happy to announce that our annual Silent Soccer Saturdays will be on Saturday, May 5th. On Silent Soccer Saturday we ask our parents and coaches not to coach and or instruct from the sidelines. This concept has been extremely successful in clubs all over the country in helping players concentrate and learn to communicate with each other on the field.

What is Silent Soccer Saturday you ask?

Silent Soccer Saturday is the one day out of the season in which we request that parents, coaches and spectators not talk to, instruct, or coach players during the game. Clapping and cheering are allowed and encouraged, especially when a player scores a goal or makes a big save! 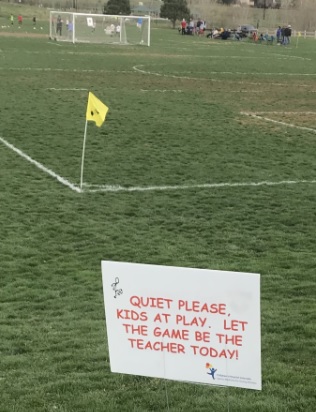 This might sound like a radical idea but the addition of Silent Game Days has been met with huge success rates all over the country. Soccer is a free-flowing game in which players are encouraged to make their own decisions on the field. This is especially true when players have the ball at their feet. Oftentimes it is the players’ themselves who report the most positive feedback about Silent Game Days, because the game belongs to them.

That’s not stupid, you say. It’s important to have positive conversations and comments from the sidelines. I agree, which is why a parent telling his kid to mark an opponent during a throw-in or corner kick is part of the game – and it actually works. It is possible to be positive and encourage better play from the sidelines.

Let’s be honest: This is all because some meathead parent – likely an adolescent-acting father – criticized the referee too much, got in a fight with a parent, or otherwise behaved like a jerk. I get it. Some people can be SOBs. But you don’t make stupid rules for the masses because of a few.

So no, I will not pay the $1,000 damage deposit and $50 registration fee for using an area in our neighborhood I’m free to use anyway. And no, I will not be silent while watching my children in their sports and activities (As it happened, I was reprimanded on Silent Saturday for telling my daughter, who is a forward, to get down the field. I’m sorry. Did my First Amendment get in the way of your little game of tyranny?).

Here’s what I will do: I will always say, “Under God” when reciting the Pledge of Allegiance. I will always stand and place my hand over my heart for the National Anthem. And I will do these things and other things while not being a jerk to others because liberty requires it.

But I will also throw the flag and speak up when busybodies at the local or national level, bored with their otherwise meaningless lives, come up with nonsensical restraints that lock down liberty.