The financial gloom-and-doom predictions of Trump’s critics didn’t age well, did they?

We’ve had ‘financial experts’ who pulled all their money out of the markets for fear of the Trumpian collapse that never came. You know, money that was going to help fund the education of one expert’s kids.

We’ve had professional politicians — notably Hillary and Obama tut-tut Trump’s platform, and say it is doomed to fail.

We have video of it, in fact.

Besides the gloating the right will enjoy from it, we did manage to pull out this fun photo of her delivering that dopey message. 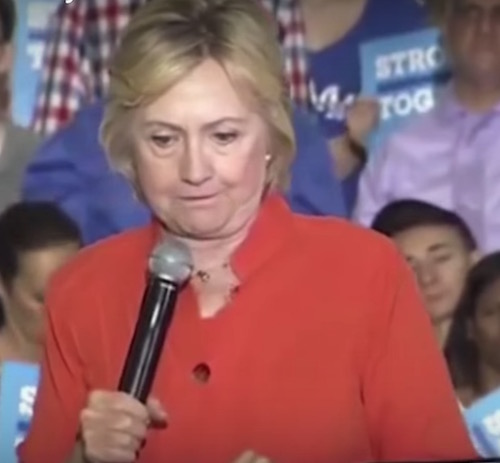 It’s probably not far from the look on her face when she saw America’s latest financial news.

U.S. households added $1 trillion to their wealth in the first three months of this year, boosted by rising stock prices and home values, the Federal Reserve said on Thursday.

The rising value of their investments has now boosted their net worth by over $6 trillion compared to the first quarter of 2017, a period that largely overlaps with the first year of the Trump administration.
Source: Reuters, via USNews

While Obama and Hillary are eating their well-deserved crow, how is America reacting to this news?

That seems about right.