Authorities are calling it a ‘targeted attack’ because he had a history with this particular paper.

Jarrod Ramos, 38 has been apprehended and is charged with five counts of first degree murder after a spree of violence in a Maryland newsroom left 5 dead and 2 others wounded.

He evidently knew his way around the building.

When police found him, he was ‘cowering’ under a desk.

He had also taken steps to ‘damage his fingertips‘ in an apparent effort to make fingerprint ID more difficult.

He had a history with that particular newspaper, including bringing a lawsuit against them. They had reported about the criminal charges where he was convicted of misdemeanor harassment against a former high-school classmate who had turned down his advances. He sued — unsuccessfully — for defamation.

A Twitter account bearing Ramos’ name and using the handle @EricHartleyFrnd—the name of one of the writers from Capital Gazette that he sued—tweeted several times about the newspaper. On February 7th, 2015, the account tweeted an explicit threat toward two of the defendants in his lawsuit. “I’ll enjoy seeing @capgaznews cease publication, but it would be nicer to see Hartley and Marquardt cease breathing,” the account holder wrote.
Source: Gizmodo

“This was a targeted attack on the Capital Gazette,” acting Anne Arundel County Police Chief William Krampf. “He looked for his victims as he walked through the lower level.”

Police arrived at the scene within about 60 seconds of the shooting, police spokesman Lt. Ryan Frashure told reporters, and took the suspect into custody without an exchange of gunfire. More than 170 people had been inside the building at the time of the shooting, according to police.
Source: Time

Here is the front page of today’s issue of the Gazette. 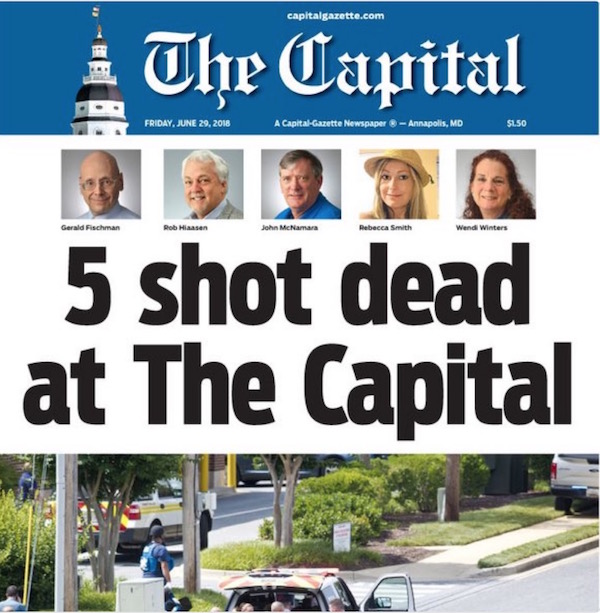 And a tweet by one of the employees in reaction to the shooting:

The judge set Ramos straight about the lawsuit he had filed.

Ramos accused the Capital of defamation and sued, representing himself in court, unsuccessfully. In a hearing, a judge explained to Ramos how journalism works.

“I think people who are the subject of newspaper articles, whoever they may be, feel that there is a requirement that they be placed in the best light, or they have an opportunity to have the story reported to their satisfaction, or have the opportunity to have however much input they believe is appropriate,” the judge told Ramos, according to a court transcript.

But, the judge said, the paper had nailed the story: “There is nothing in those complaints that prove that anything that was published about you is, in fact, false.”
Source: LaTimes

He was a known problem to police, even back then, but it had not risen to the level of criminality, so there was little that could be done about it.

Ramos’ lawsuit was worthless, but he apparently could not let the matter go. A Twitter account launched under his name, but with Hartley’s face on it, showed hundreds of posts related to the case and its various appeals.

The account also included a post alluding to shootings of journalists, including the 2015 attack on the Charlie Hebdo offices in Paris and two Virginia television journalists who were killed on live television later that year.

“He waged a one-person attack on anything he could muster in court against the Capital,” Tom Marquardt, the newspaper’s editor and publisher until 2012, told the Los Angeles Times in a phone interview.

“I said during that time, ‘This guy is crazy enough to come in and blow us all away,’” Marquardt said, adding that he and other newspaper officials had fretted over how to stop Ramos’ harassment. He even kept a file on Ramos for years after leaving the paper.

Marquardt said police couldn’t arrest Ramos for his behavior toward the newspaper, and the paper was reluctant to sue him. “The theory back then was, ‘Let’s not infuriate him more than I have to.… The more you agitate this guy, the worse it’s gonna get.’”
Source: LaTimes

In all, there were five fatalities:

Four journalists and a sales assistant were killed Thursday in a shooting at a Maryland newspaper. Authorities said the gunman entered the Capital Gazette in Annapolis and “looked for his victims.”

Police arrived on scene within a minute.

They rushed directly into the building.

By all accounts, the police performance was as nearly perfect as one could imagine.

But those sixty seconds were all the attacker needed.

Would this story have ended differently — with fewer casualties or possibly none at all — if someone there were carrying?