‘TED talks’ are no stranger to controversial topics… but this one was too much even for them.

For many people, TED talks are ‘the’ place to go to find interesing and informative speakers who will give you the latest scientific discoveries, new steps forward in technology, and even how the way you probably tie your shoes is “wrong”. (No, really. It’s in there.)

But this particular TED event pushed the boundaries too far in exploring the topic of pedophilia, what it is, and what it isn’t, with particular emphasis put on making distinctions between the sexual urge itself and acting out that urge with another person.

It was controversial enough that the official blog for TED talks issued the following announcement:

Updated June 20, 2018: An independently organized TEDx event recently posted, and subsequently removed, a talk from the TEDx YouTube channel that the event organizer titled: “Why our perception of pedophilia has to change.”

In the TEDx talk, a speaker described pedophilia as a condition some people are born with, and suggested that if we recognize it as such, we can do more to prevent those people from acting on their instincts.

TEDx events are organized independently from the main annual TED conference, with some 3,500 events held every year in more than 100 countries. Our nonprofit TED organization does not control TEDx events’ content.

This talk and its removal was recently brought to our attention. After reviewing the talk, we believe it cites research in ways that are open to serious misinterpretation. This led some viewers to interpret the talk as an argument in favor of an illegal and harmful practice.

Furthermore, after contacting the organizer to understand why it had been taken down, we learned that the speaker herself requested it be removed from the internet because she had serious concerns about her own safety in its wake.

Our policy is and always has been to remove speakers’ talks when they request we do so. That is why we support this TEDx organizer’s decision to respect this speaker’s wishes and keep the talk offline.

We will continue to take down any illegal copies of the talk posted on the Internet.

For an idea of what was controversial about it, here is a portion of the transcript excerpt via Youtube, with its video timestamps:

we should accept that
09:12
pedophilia is a sexual preference a
09:15
thought a feeling and not an act
09:20
we should differentiate between child
09:22
sexual abuse and pedophilia
09:25
we shouldn’t increase the suffering of
09:28
pedophiles by excluding them by blaming
09:31
and mocking them by doing that we
09:34
increase their isolation and we increase
09:37
the chance of child sexual abuse only if
09:43
they make themselves recognizable
09:45
because they’re not afraid of punishment
09:47
of anger and rejection can we better
09:51
understand the causes of pedophilia and
09:54
we can improve their treatment we can
09:57
help them accept their sexuality and
09:59
help them learn to refrain from acting
10:03
on their sexual urges which cause harm
10:05
to children we can encourage them never
10:09
to commit child sexual abuse we can help
10:13
them refrain from entering dangerous
10:17
situations they might not control
10:19
entirely and we can prescribe medication
10:26
this approach has already been
10:29
successful in the last 10 years more
10:35
than 9,500 people have received help in
10:40
a prevention network called
10:42
kindly to Verdun but which means don’t
10:47
offend in English at University
10:49
Hospitals in Germany the last survey
10:55
shows that 98% have never committed
10:59
child sexual abuse
11:02
unfortunately this program is
11:06
not gonna eradicate child sexual abuse
11:09
but it is the first step in the right
11:14
direction pedophiles who have received
11:17
treatment have a better understanding of
11:21
who they can turn to in order to prevent
11:23
abuse before it happens most of you
11:30
might ask themselves now why is she
11:33
telling us that five years ago
11:38

Answers in Genesis has a clip of the original video:

Some further background on her, and the reasons for addressing this topic in the first place 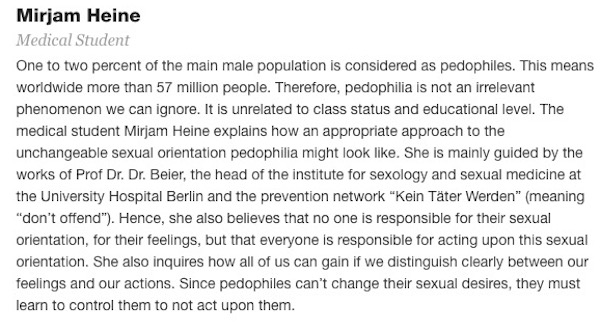 And some further background on the speech itself:

On May 5, medical student Mirjam Heine spoke at an independently organized TEDx Talk event at the University of Würzburg in Germany. In a description of the event, the TED Talk website explained that Heine’s would focus on her belief that pedophilia is a natural, unchangeable sexual orientation.

Ms. Heine “believes that no one is responsible for their sexual orientation, for their feelings, but that everyone is responsible for acting upon this sexual orientation,” the website reads. “She also inquires how all of us can gain if we distinguish clearly between our feelings and our actions. Since pedophiles can’t change their sexual desires, they must learn to control them to not act upon them.”
“Let me be clear here, abusing children is wrong without any doubt. But a pedophile who does not abuse children has not done anything wrong,” Heine said in her lecture.
Source: Breitbart

Masks Send A Message Even If You Do Not Want Them To Do So
April 12th, 2021 Sons of Liberty Media