It looks like ‘taking a stand’ against this 80-year old company wasn’t the brightest idea that they had.

In March, at the insistence of gun-control activists, the video-streaming platform announced that it was going to crack down on videos that promote the sale of firearms and accessories.

Over the weekend, YouTube had firearms retailer, Brownells, in their sights. Brownells videos were suddenly removed on Saturday with no warning, and almost two days later, they were just as suddenly returned.

YouTube took down videos from US firearms retailer Brownells without warning over the weekend as part of its ongoing crackdown on gun-related content.

YouTube had removed the entirety of the firearms retailer’s videos despite some that were about gun safety, marksmanship, hunting, and firearms maintenance.

The firearms firm called for followers of its social media accounts to send complaints to Google, YouTube’s parent company, in a series of heated posts. 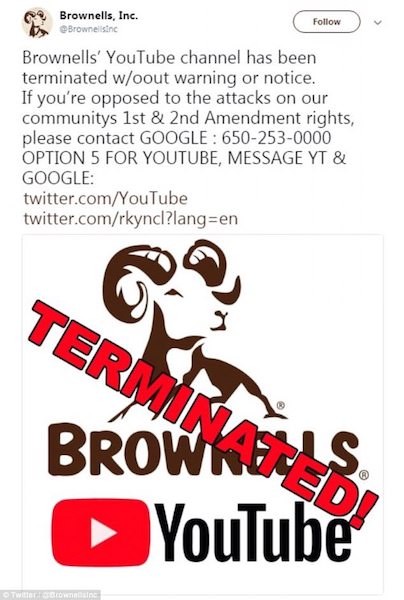 At around 0:00am BST Monday (7:00pm ET, Sunday), Brownells announced its channel had been restored, just 40 hours after the account was first banned.

YouTube offered no explanation as to why it chose to ban and then bring back the Brownells channel.

The company did not immediately respond to a request for comment.

Of course, they didn’t.

Eventually, they issued a statement.

‘We routinely make updates and adjustments to our enforcement guidelines across all of our policies,’  YouTube spokesperson said in a statement.

‘While we’ve long prohibited the sale of firearms, we recently notified creators of updates we will be making around content promoting the sale or manufacture of firearms and their accessories, specifically, items like ammunition, gatling triggers, and drop-in auto sears.’

Any comment on the gun safety, firearms maintenance, or the other non-sale related videos being removed?

Welcome to the new normal where gun control is the default.

Right up until the sane law-abiding gun owners take to social media and call them out for the censorship that this is.