If you’re tired of Leftist feelings-based arguments about Jesus and the immigration issue, here’s an actual Biblical scholar turning all that on its head.

And no, Leftists. He isn’t ‘anti-immigration’.

He strongly supports those immigrants who enter and apply through the lawful and orderly means.

When there’s a Systematic Theology with your name on it, your claims to be an authority on Jesus carry more weight than some schmuck holding a picket sign asking Who Would Jesus Deport? 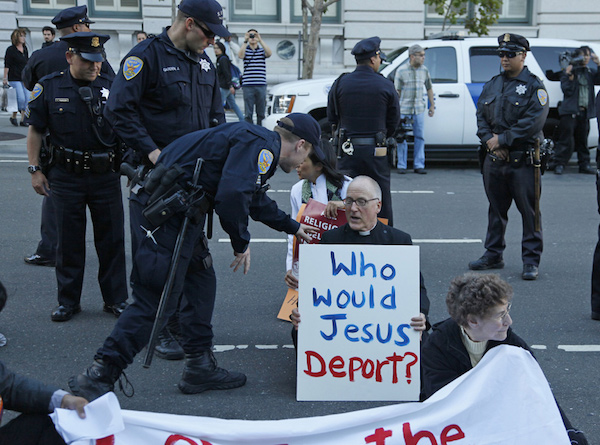 Wayne Grudem, a professor who has taught biblical ethics for 41 years, knocked down their arguments one by one in a recent piece:

Here’s the quick summary of his points, many of which are drawn from the Bible.

Walls gave peace and security.
The walls provide protection, the gates provide controlled access to keep out threats to that peace, military or otherwise. He notes that even the ‘New Jerusalem’ in the biblical description of the world to come (Revelation 21) includes a wall and whether it is to be viewed as literal or symbolic doesn’t much affect the meaning and role of that wall.

He goes into an explanation of why strong walls are important and counted as biblical blessings, explaining that walled cities like Jerusalem and secure nations have parallel legitimate goals, before addressing some of the usual objections:

Objection 1: We should be a nation that welcomes immigrants.
Yes. Absolutely — Lawful immigrants should be welcomed. But there are very compelling reasons that it’s not even in the interests of the illegal aliens themselves to bypass lawful entry, including such things as safety, exploitation. And that’s without even addressing the national interest of screening out those with evil intent.

Also — how MANY such immigrants should we welcome? And what defines the upper limits of our capacity to accept them?

As it is, America welcomes more lawful immigrants per year than any other single nation. (One million)

If you think that number should be changed, the correct remedy to that concern is to petition Congress to adjust that number either higher or lower, NOT that we should turn a blind eye to unlawful entry.

Objection 2: The Bible tells us to care for the sojourner.

Correct. But the Bible uses a different word for ‘sojourner’ and for ‘foreigner’.

A foreigner who had entered a country by stealth and did not have recognized standing as a resident alien was not considered a “sojourner” (Hebrew ger) but simply a “foreigner” (Hebrew nekar or zar).

Objection 3: These are good people who are just seeking a better life.

Sure. Many are, and those who come legally should be welcomed. But others are crossing the border, too. Including repeat deportees who have convicted violent crimes. Child traffickers. Drug smugglers and the like. That’s why we emphasise LAWFUL entry, to help sort the ones we will want to welcome from those we want to keep out.

A wall is also more compassionate in view of that issue concerning families being split up:

An effective border wall would also be the best way to keep children together with their parents. Under the present system, families (1) enter the US illegally and (2) are caught, then (3) they plead for asylum, and (4) they are incarcerated until their asylum petition can be evaluated. But if we had a completed wall, such requests for asylum would be decided at the border, before they ever entered the US. We would never have to detain either parents or children on US soil in the first place.

They already have brought crime down in places like El Paso and San Diego.

To prove they work, Grudem goes on to list a place where we are already using very effective walls, without anyone objecting to them.

You didn’t forget that they are ALSO lawful ports of entry into the country, did you?

And yet, for some reason, nobody is denouncing our reliance on passports and security for those who would enter through our airports?

Weird. It’s almost as though there is something about letting people violate our Southern border that is treated differently for some reason.

It couldn’t be political motivation, could it?