Would the Media(D) be concerned about potential implications to democracy if the parties affected were switched?

It’s no secret that ‘Social Media has changed everything’. It’s not just about vacation pictures and cat memes. It has become THE medium by which we gather our news, speak to our friends, and interact with the wider digital world.

And everything changed in January when the Facebook Algorithm changed.

Here’s a quick recap for anyone who wasn’t paying attention.

In response to concerns about ‘fake news’ (meaning, essentially, the Digital New Media, not the discredited stories on the ‘respectable networks’ or the 90%+ negative coverage bias against Conservatives found in ‘traditional’ outlets) Facebook in particular (but other networks, too) started a version of censorship.

They banned some sites outright — but because they were openly racist, only free speech absolutists really kicked up a fuss about that. Although, it was noticed that openly racist groups with different affiliations seemed unaffected.

Then they appointed fact-checker groups who skewed heavily left (Politifact, Snopes, and SPLC among them) to ‘identify fake news’ outlets who just ‘happened’ to be political rivals.

Sites and people so identified saw their numbers crater. Their posts and stories weren’t showing up in the feeds, even among those who WANTED to follow them or see them.

This brings us up to today. Western Journal looked into how The Algorithm change impacted both parties.

Assuming this was even-handed, there should be a similar impact on both parties, right? And if it’s NOT even-handed — in either direction — it should raise concerns about the impact on our Democratic process.

After all — if America is up in arms about a few Russians throwing advertising dollars into the race to affect outcomes, shouldn’t we be at LEAST as concerned if the platform itself is favoring one side over the other in the actual ACCESS to their own followers?

Here were the findings:

After Facebook’s January algorithm changes, pages associated with members of both major parties saw a significant decrease in interactions with readers, but the Facebook pages of Republican members of the House and Senate were impacted measurably more than those of their Democrat counterparts.

The exclusive report showed that the interaction rate on Republican congressional Facebook pages decreased by 37 percent, compared to a change of just over 27 percent on Democrat-operated pages.

Using Facebook-owned ‘Crowd Tangle’,  they gathered interactions both before and after the January change, exempting January itself, when the change took effect. 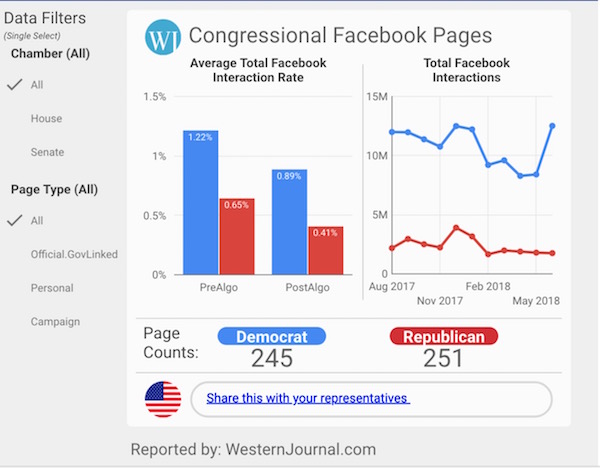 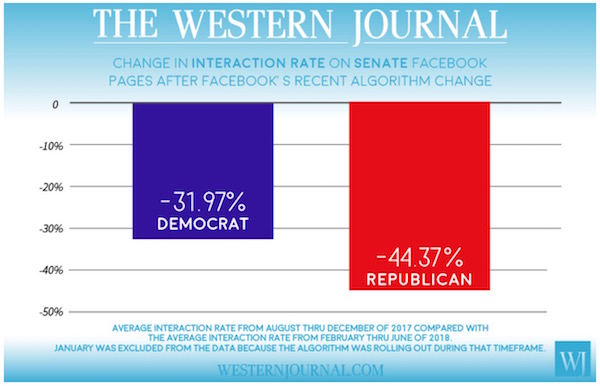 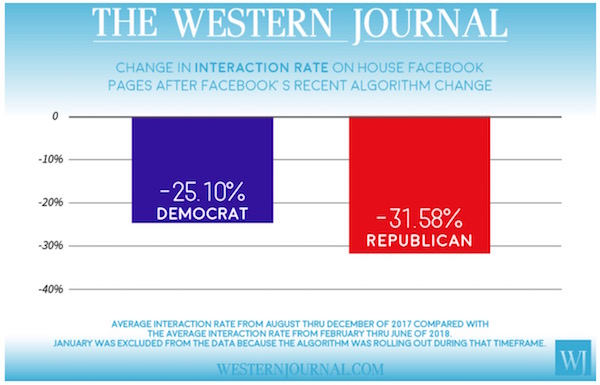 This is only part of a longer list they have gathered, but the trend holds.

This is an election year, isn’t it?

The left loves to whine about the Koch brothers and their ‘dangerous’ influence.

Hillary was up in arms about Citizen’s United being able to make a movie critical of her.

But what about when some politicians have greater digital access to their own public and constituents than their political rivals?

Is THAT a dangerous precedent? And if not… we all know the digital world keeps changing. Just ask Blackberry and Nokia about their cell phone dominance, if you doubt that.

Suppose the NEXT big Social Media thing retaliates and gives the Republican politicians an unfair advantage perhaps because they like those tax policies better… would the Media start to see this as a threat to Democracy THEN?

The whole point of elections — and the free press, for that matter — was supposed to be a citizenry who could make informed choices. Not a citizenry who can be fed pre-chewed opinions, and be kept in the dark about what the other side would have to say in criticism.

Here are some links to stories we’ve run about the credibility of Facebook’s preferred fact-checkers:

FAKE NEWS: Just HOW Worthless Are Those New ‘Media Monitors’… Here’s A List!