Is this “a first step at reconciliation”, or is this a “white flag of surrender to a militant opponent in the culture war?”

In an effort to move past the gridlock over the question of politicized sexuality, one group of people have taken an unsual step. They are apologizing for the behavior of Christians.

Members of the Church of Freedom in Christ Ministries stood at the main entrance of the parade holding signs that offered apologies for how the LGBT community has been treated by Christians.
Their banners read, “We’re here to apologize for the ways that we as Christians have harmed the LGBT community.”
[…]

The demonstration was part of the church’s “I’m Sorry” campaign, through which members seek to apologize on behalf of their fellow Christians for the way biblical writings have been used against the LGBT community.
In a statement on its Facebook page, the church wrote, “We do not need the recognition of people but the heart-warming response of those who accepted our sincere apologies motivates and encourages us to continue doing this mission of our church.
Source: CNN 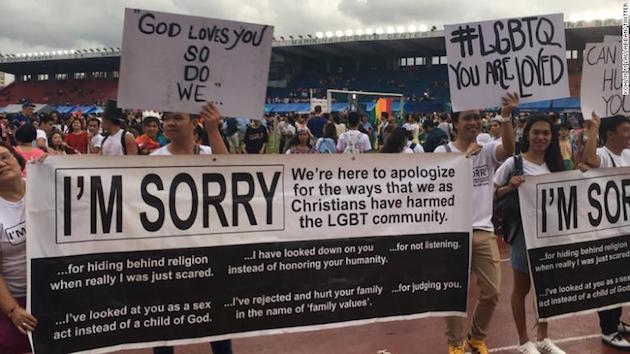 Christians are called by scripture to be peacemakers, obviously. We are even called to pray for those who mean us harm. But are we called to ‘peace at any cost’?

Romans 18 instructs “Repay no one evil for evil, but give thought to do what is honorable in the sight of all.  If possible, so far as it depends on you, live peaceably with all.” — ESV verses 17-18

But that is in the same scripture that tells us, “Strive for peace with everyone, and for the holiness without which no one will see the Lord.” (Hebrews 12:14).

And the same Jesus that told us ‘blessed are the peacemakers’ also told us that he has not come to bring peace, but a sword.

This is not, after all, the only way that the church can be welcoming of those who have been part of the LGBT crowd, as one man shared his very personal story, one that is very different from what you’d see in the Pride pamphlets. He now runs a site that isn’t afraid to ask some tough questions about the issue itself.

Clash reported on his story here:

Is this public apology in Manilla an attempt to be inclusive a faithful expression of Christian love? Or is this a ‘Peace In Our Time’ moment where — in the face of cultural opposition — they are rejecting Christ so they can be accepted by the world?

Clash Poll: Christians Apologize To Gays At Pride Parade - Is This A Good Idea?