This is a no-brainer.

Just like ‘Auntie Maxine’ or Mad Maxine, depending on your political tilt

How in the hell does she keep getting elected?

They’re not saying too much about ‘Mad’ Maxine calling for the harassment of conservatives in their everyday lives, though.

President Donald Trump is predicting Representative Maxine Waters’ ‘ranting and raving’ will drive voters from the Democrats and is accusing the lawmaker of being ‘one of the most corrupt people in politics.’

Trump was on a twitter tear Tuesday morning, writing on a variety of topics from the election to border issues to his Supreme Court nominee.

But he hit Democrats heavily, particularly Waters, who he has repeatedly gone after ever since she called on the public to assail his administration officials when they see them.

Crazy Maxine Waters, said by some to be one of the most corrupt people in politics, is rapidly becoming, together with Nancy Pelosi, the FACE of the Democrat Party. Her ranting and raving, even referring to herself as a wounded animal, will make people flee the Democrats!

Many Democrats are deeply concerned about the fact that their “leadership” wants to denounce and abandon the great men and women of ICE, thereby declaring war on Law & Order. These people will be voting for Republicans in November and, in many cases, joining the Republican Party! 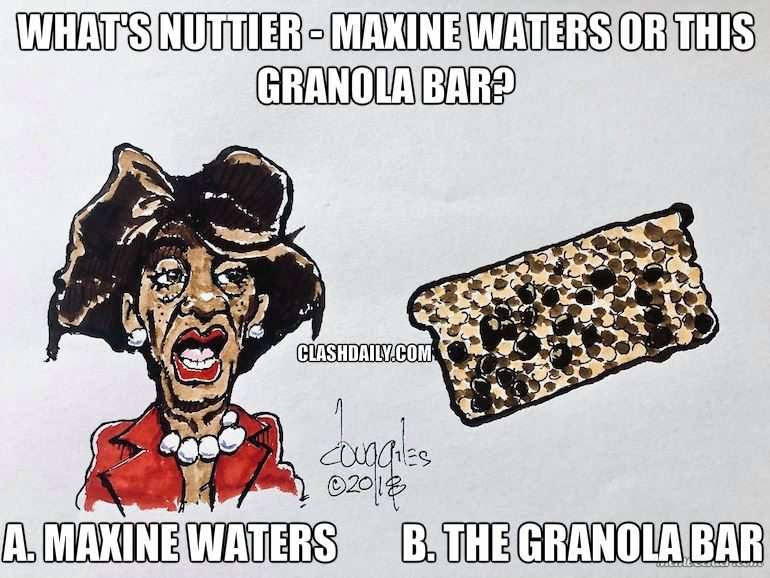 Trump has sought to make Waters, one of the fiercest critics of his administration, the face of the Democratic Party.

Actually, I don’t think it’s Trump doing that, she’s determined to make herself famous for her Resistance. Look how often she chants ‘Impeach 45!’

But, just like everything else, it’s all Trump’s fault.

He attacked her as ‘one of the most corrupt people in politics,’ a likely reference to a 2010 ethics investigation where Waters was ultimately cleared.

Eight years ago, the House ethics committee charged Waters with three counts of violating House rules and the federal ethics code in connection with her effort to help a bank in which her husband owned stock secure federal bailout funds.

She was said to have arranged a 2008 meeting between Treasury officials and representatives with OneUnited bank.

Waters arranging the meeting was significant because her husband had owned a sizable amount of OneUnited bank stock, so Maxine stood to gain from the meeting.

So far, it looks as though the only reason that Maxine Waters is in office is to pad her own wallet. She’s only passed 3 bills since she was first elected to Congress in 1990 — a Haiti relief bill, the renaming of a Post Office, and modification to the national flood insurance program. That is a horrendous record.

Back in the early 90s, she praised the violent rioters and even embraced Damien Williams, the Crips gang member that slammed a chunk of concrete at Reginald Denny, an innocent bystander, and danced over the man’s battered body.

She’s also the representative of South-Central Los Angeles, an area of the country notorious for its persistent unemployment, poverty, and gang violence. It’s not improved in the 38 years that Maxine has been in office. She doesn’t even live in her own Congressional District. But Maxine has benefitted an estimated $1 million from her connections in Washington over her 13 terms in office. She was even caught paying her daughter a six-figure income while criticizing Ivanka advising her father.

To add to her exemplary bad legislative record, Citizens for Responsibility and Ethics in Washington has named Maxine Waters the Most Corrupt Politician 4 times.

President Trump promised to Drain the Swamp. He’s now exposing Maxine Waters for what she really is. Isn’t that a great start?

Maxine Waters is a Swamp Thing that needs to go.