These are the same parents that are teaching their girls ‘tolerance’ because the President is so very nasty.

The President of the United States is practically Hitler because he wants to enforce the immigration laws that are on the books. (That was sarcasm, by the way.)

Yet, that’s precisely how these people think.

According to them, President Trump only wants to enforce immigration law because he’s racist and it’s ‘brown people’ crossing the southern border. Really? Let’s see what happens when a Canadian of any color is caught crossing the border illegally. Do you think there’s the same kind of ‘compassion’?

Newsflash to the left: There are reasons other than racism for wanting to enforce immigration law.

Like maybe the Rule of Law. Now, I know that’s a new concept for some of y’all, but I have faith that you can look up what it means.

And heck, if you don’t like the laws on the books, then let’s talk about changing the law. We could have a robust debate on issues, it’ll be like the good ol’ days before conservatives were called every name in the book and a sitting Congresswoman demanded the President be impeached at every opportunity.

But no. Can’t have that. It would hinder the #Resist movement.

And what a classy bunch those anti-Trump folks are!

A couple that brought their young daughters to a Denver protest against President Trump enforcing the law — I mean, separating families just as the Obama administration did — are in hot water on social media for a photograph of the girls wearing ‘F**k Trump’ t-shirts.

This is what happens when the Trump Derangement Syndrome gets so bad that you don’t even realize you’ve become a horrible person.

The parents of two young girls have been slammed online for wearing ‘f*** Trump’ shirts at a ‘families belong together’ rally in Denver.

A picture of the girls was shared to a Facebook page for the event with the caption: ‘Denver’s youth with ALL the style and major cuteness to boot’. 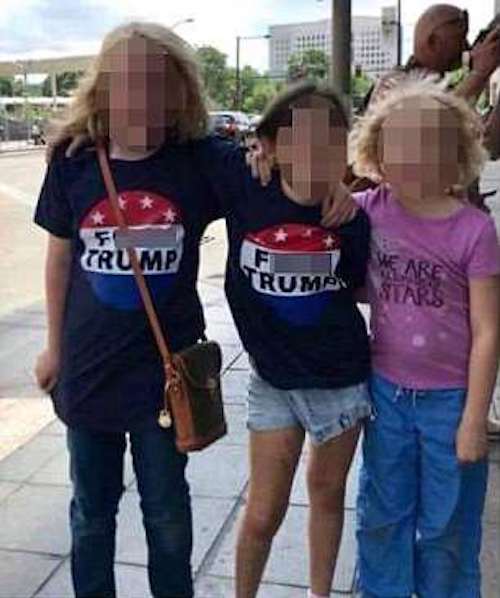 Other images from the anti-Trump (or anti-border law, if you prefer,) protest showed piles of shirts on a table suggesting that they were either handed out or sold at the rally.

Texas’ Commissioner for Agriculture Sid Miller was one of the first to slam the parents of the children publicly, sharing the image to his own page.

‘I don’t care what your political affiliation is nor what your personal feelings about our President may be. No parent should do this to their children,’ he wrote.

Many agreed with Miller. 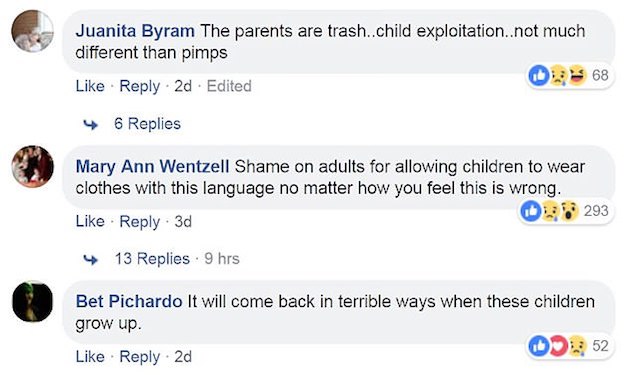 ‘This is what we are up against. They think this is cute,’ wrote one man.

‘I say this is a form of child abuse.’

A woman called the parents of the children ‘trash’ and said it was a form of exploitation akin to prostitution.
Source: Daily Mail

And this is the crux of the issue — these people are protesting families being separated at the border, because of the parents committing an illegal act, but say nothing about the American families that have children forcibly removed for various reasons and placed into foster care.

Let’s be real for a second, some families just aren’t that great — there’s abuse, drug use, exploitation, criminal activity, and the kids just aren’t safe with their parents.

But where are the protests for those families?

This protest against ‘kids in cages’ sprung up out of nowhere at the same time as the I.G. report found no Russian Collusion and the damning evidence of heavy anti-Trump bias in the Intelligence community. Not only that, the ‘kids in cages’ image was from 2014 — who was President back then?  I can’t remember because his legacy has been completely erased.

Are these parents great examples for their daughters?

Is it ok for them to photograph them in these shirts with profanity denouncing the duly-elected President and the share the photo with pride?

Or is it a form of child abuse?

If it is a form of child abuse, should the kids be taken from their parents?