With the Dems fighting so hard not just for immigrant, but for ILLEGAL immigrants, this is no longer an academic question.

This question was posed by a legal immigrant with brown skin:

If we had ICE at every polling station, would Democrats still win the popular vote?

But of course, he’s a prominent Republican, so he’s being called ‘racist’ over it anyway.

Is his question REALLY that unreasonable?

If ICE Watched Every Polling Station, Would Democrats Win The 'Popular Vote?'

Take a step from the usual rhetoric. And think about the current news cycle.

For starters, take stock of all the ‘deep concern’ about ‘foreign influence’ in elections. Picture it in your mind. Got it? Good. Now hold that thought…

Noncitizens in San Francisco Can Now Register to Vote, But Only in School Board Elections

Portland, Maine Pushing To Allow Non-Citizens To Vote In Elections

Those are real headlines for real stories. One is KTLA, and the other is CBS Pittsburg. They’re real sites, not some fly-by-night site, and not even one that’s been added to the Leftist fact-checkers Blacklist. (Ie: any news site that doesn’t lean Left of Lenin).

The staff of the Boston Herald had to take the unsual step in their editoral department of explaining what — only a few short years ago — any self-respecting schoolkid would have taken for granted:

Editorial: Voting is for citizens

But now, that idea is up for debate. Apparently.

Add to that the calls to abolish ICE, and the defiance of Federal Law by establishing ‘Sanctuary Cities’, and you’ve got a recipe for systemic abuse.

Here’s a story going back to 2014:
HOPE AND VOTER FRAUD: Could Non-Citizens Decide the Midterm Elections?

There were other red flags, too:

Last week in Michigan, O’Keefe struck again, testing the state’s voter-ID law, which allows non-ID holders to vote if they merely fill out an affidavit claiming they are who they say they are. Such affidavits are almost never checked. Using this ruse, O’Keefe told different poll workers he was Detroit mayor Mike Duggan, Wayne State University Law School dean Jocelyn Benson, and columnist Nancy Kaffer of the Detroit Free Press — all whom strongly oppose voter-ID laws. In each case, poll workers offered him primary ballots for the person he was claiming to be. He was also offered the ballot of legendary Michigan rapper Eminem, whose real name is Marshall Bruce Mathers III. In all but one sting, the poll workers offered him a ballot, though he never actually accepted a ballot or cast an illegal vote.
Source: Clashdaily

And of course, who can forget this:

But to mention that we should be citizens, or have ID to qualify as a valid voter? That’s ‘racist’… right? 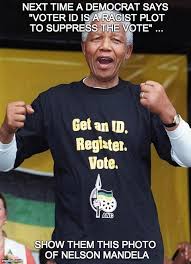