It’s been a long road, but this lady’s recovery is something to behold.

The damage would have been much worse if it hadn’t been for the quick intervention of the firefighter husband.

A Pennsylvania woman, Regina Morelli Benford, 44, from Rockwood had a freak accident last summer when she was attempting to move the metal grate on her barbeque. She credits her husband Sheldon, 49, with saving her life.

Mrs Morelli Benford had been trying to move the barbeque’s metal grate when she noticed the fire was too big and the metal was glowing orange and bending.

She tripped and fell onto the grill, causing her to pass out on the scalding metal, but her husband quickly pulled her off and wrapped her face in cold wet towels.

She said that she looked like the DC comics villian, Two-Face, because the burns were mainly on the right side of her face.

Mrs. Morelli Benford was horrified when she first saw her face in the mirror after the accident.

She screamed when she saw her face in the mirror for the first time, and in the following days her face swelled up so much her eyes were almost closed.

It was such a freak accident she says that she would never have dreamed something like that could have happened to her.

‘I remember falling and I don’t remember much after that, my husband says I was lying on the grate when he pushed me off.

‘I went into shock and just sat there on the deck.

‘My husband saved my face and life, his instinct as a firefighter kicked in and he wrapped my face in cold wet towels.

‘I wear both contacts and glasses, I had glasses on that day and had I not I would have lost my eye. I feel very lucky.’

At first, she was uncomfortable with the stares and kept her head down when she was out in public, but as her recovery has progressed, she said that she has nothing to be ashamed of, so she isn’t hiding away. She also wanted to set a good example for her children and others.

But now, 10 months later, Mrs Morelli Benford has improved her scars with a meticulous skincare routine and says she wants to encourage people to see past physical difference.

Her recovery has been astounding.

‘I’m fortunate as my skin is getting better each day and week,’ she said. ‘Some people say you wouldn’t even notice the scars.

‘People tell me they cannot believe how good my face looks.

‘My husband is my hero even more now, if it wouldn’t have been for his quick thinking it could have been a lot worse.’

The third-degree burns had damaged the nerves on her forehead, and it was painful as they were healing.

‘Over time, I could feel the nerves coming back, it was like someone tattooing your eye or using a bug zapper, it felt bizarre.

‘But the part that really hurt was having to clean it four times a day. I can take a lot of pain but at times I thought I was going to pass out.

Her skincare routine to minimize scarring is time consuming and painful. She uses essential oils, organic rose water, vitamins B5 and E. She also uses other moisturizers and covers up to prevent more damage.

‘Burns can get infected so easily I was almost obsessively keeping it clean and hydrated, especially because it was on my face.

‘Maybe I’m a little vain, but it’s my face and you want to keep it nice, I have a good serious skin routine going on now.’

She chronicled her recovery in photos. 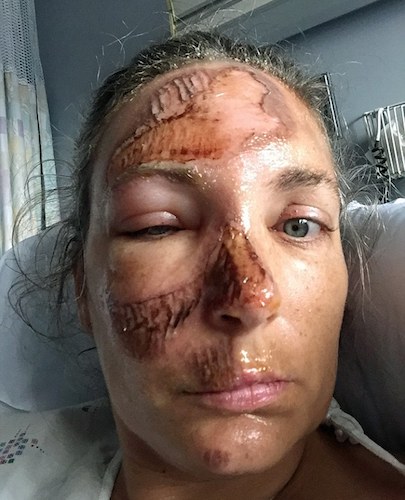 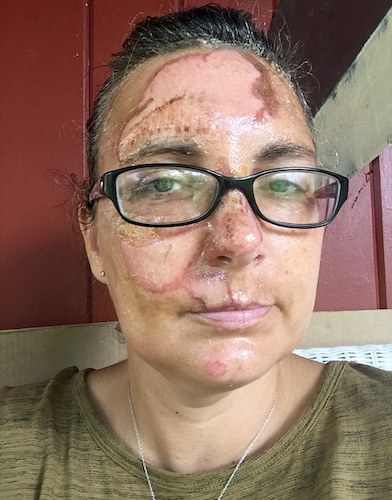 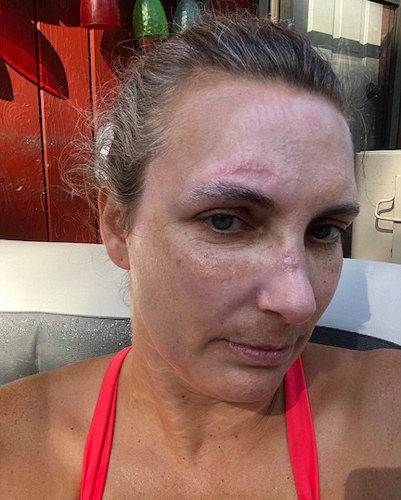 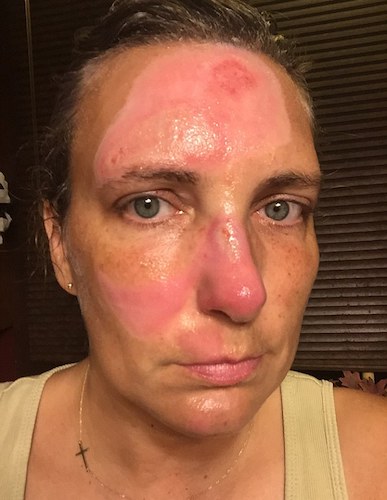 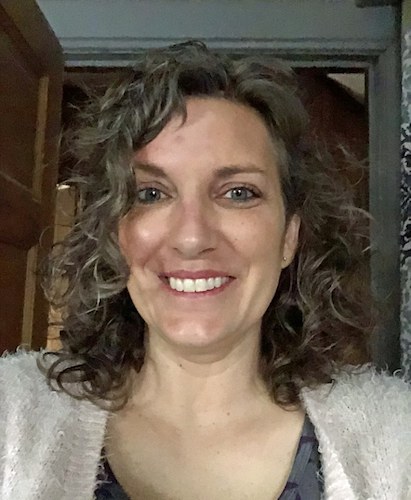