It looks like the Media (D) is suffering from selective amnesia. They’re angry with President Trump but gave Barry a free pass. Here’s the 411…

The Media (D) is going mental over CNN reporter Kaitlan Collins being excluded from a press event at the White House. Collins had shouted questions about the Michael Cohen tapes during a Presidential photo op with Jean-Claude Juncker, the European Commission president. Collins was told that her questions were ‘inappropriate’ and that she was barred from the later joint event with Trump and Junker to announce a working dialogue on trade.

So, Collins wanted to embarrass the President at a photo op and then attend the event.

That’s not how it works, honey.

And it hasn’t for a long time.

If the Media (D) is outraged at how the Trump administration is handling what passes for ‘journalists’ today,  maybe they should take a moment to reflect on the last administration.

Not just the ‘hard-hitting’ questions that they gave Barry.

Check out the most egregious example by Jeff Zeleny from the New York Times, the newspaper that was the former ‘Gold Standard’ of Journalism:

Does anyone remember when Barry’s campaign made the ‘tough decision‘ to boot off 3 journos from organizations that endorsed John McCain in 2008?

Barack Obama’s campaign has booted from its airplane three reporters who work for newspapers that have endorsed John McCain.

The campaign says that a limited number of seats forced it to make the tough decision of which journalists would be permitted to follow the Democratic presidential candidate in the last four days of the campaign, but the papers are calling foul, claiming they were targeted for their editorial-page positions and kicked off while nonpolitical publications like Glamour and Jet magazines remained on board.

Eliminated from the plane’s traveling press were the Washington Times, the New York Post and the Dallas Morning News.

The Washington Times executive editor, John Solomon, said that it felt like the ‘journalistic equivalent of redistributing wealth‘ because they had paid to travel with Obama and cover the campaign. They had been covering Obama since 2007, longer than some other organizations that were given seats, and therefore access, during that last few days of the campaign.

You can also examine how President Obama continually attacked Fox News as not being a ‘real’ news outlet.

Attacking the news media is a time-honored White House tactic but to an unusual degree, the Obama administration has narrowed its sights to one specific organization, the Fox News Channel, calling it, in essence, part of the political opposition.

“We’re going to treat them the way we would treat an opponent,” said Anita Dunn, the White House communications director, in a telephone interview on Sunday. “As they are undertaking a war against Barack Obama and the White House, we don’t need to pretend that this is the way that legitimate news organizations behave.”

Things got so bad that Jake Tapper came to the defense of Fox News.

But Stetler was wrong — it wasn’t just Fox that they targetted.

Here is White House press credential-holding reporter, Brenda Lee from the Georgia Informer being ‘escorted’ away ‘kicking and screaming’ from Air Force One in 2009. 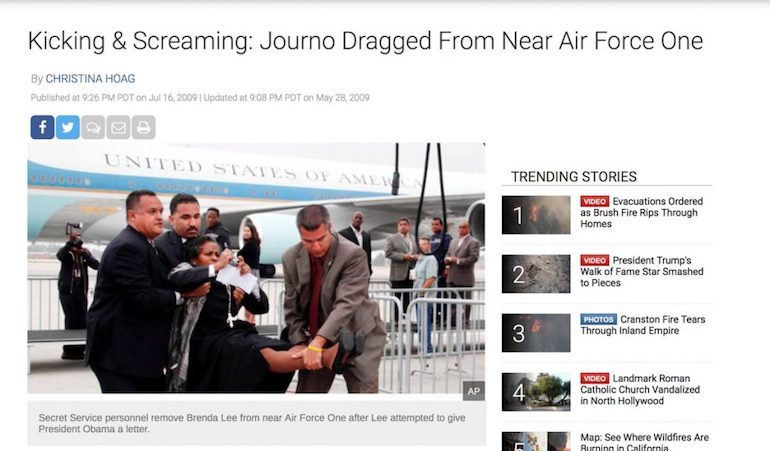 FYI, Lee was attempting to hand President Obama a letter urging him to take a stand for traditional marriage.

How about that time Barry chastized a reporter from The Daily Caller for pulling a Jim Acosta, King of Interruptions, in the Rose Garden?

The reporter, who later identified himself as Neil Munro of the Daily Caller, shouted out questions while Obama was explaining that his administration will block deportations of young illegal immigrants. That prompted the president to respond: “Not while I’m speaking.”

At the end of his remarks, however, Obama returned to Mun­ro, who was standing in the press corps area of the manicured lawn outside the West Wing and had asked why Obama’s new policy favored “foreigners over American workers.”

“And the answer to your question, sir — and the next time I’d prefer you let me finish my statements before you ask that question — is this is the right thing to do for the American people,” Obama said, before Munro shouted out again. The president added: “I didn’t ask for an argument. I’m answering your question.”

As Obama finished and walked off, Munro shouted: “What about American workers who are unemployed while you import foreigners?”

You can read The Daily Caller and Neil Munro’s statements about the incident here.

As a matter of fact, the image-framing was such a big deal that a cohort of organizations issued a joint letter to the White House asking for more access to President Obama.

White House journalists and photographers from a wide variety of media organizations are protesting limits placed on them which often bar them from taking pictures of the President.

The Associated Press, ABC News, Fox News Channel, the New York Times Co. and 34 other news organizations have voiced their demands in a letter delivered to the White House on Thursday asking for more access to President Obama as he performs official duties and meets with staff members in and out of Oval Office.

Watch the White House Press Corps get upset at Jay Carney and protests the lack of access:

The control over Barry’s image was so complete, that New York Times photographer Doug Mills compared the White House to the Telegraph Agency of the Soviet Union (TASS).

President Barack Obama is a master at limiting, shaping and manipulating media coverage of himself and his White House.

Not for the reason that conservatives suspect: namely, that a liberal press willingly and eagerly allows itself to get manipulated. Instead, the mastery mostly flows from a White House that has taken old tricks for shaping coverage (staged leaks, friendly interviews) and put them on steroids using new ones (social media, content creation, precision targeting). And it’s an equal opportunity strategy: Media across the ideological spectrum are left scrambling for access.

The results are transformational. With more technology, and fewer resources at many media companies, the balance of power between the White House and press has tipped unmistakably toward the government. This is an arguably dangerous development, and one that the Obama White House — fluent in digital media and no fan of the mainstream press — has exploited cleverly and ruthlessly. And future presidents from both parties will undoubtedly copy and expand on this approach.

Look at that! Even in their criticism of Obama, they become prostrating sycophants!

President Obama routinely limited access to journalists to control his image. It even made headlines back in the day. 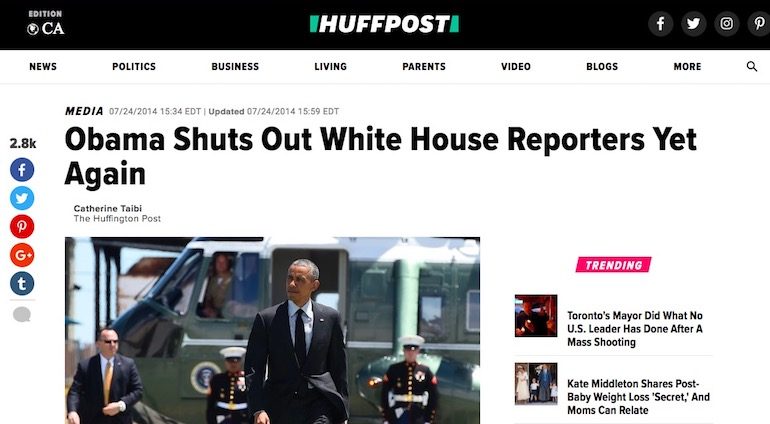 Don’t think that this was for ‘journalistic integrity’, the reporters were upset that they didn’t have access to fawn over their ‘Dear Leader’.

Watch how the unbiased Media (D) cheered, applauded, chanted ‘Obama!’, and shouted, ‘We love you, Obama!’ as Barry ejected a journalist that interrupted him by yelling, ‘No more deportations!’

Here's former President Obama having a reporter removed for interrupting him "in his house" the press claps wildly, even starts chanting Obama's name while the reporter is being removed for yelling "NO MORE DEPORTATIONS" #KaitlanCollins cc: @BretBaier pic.twitter.com/FuAuTEmG1Y

It wasn’t just Barack Obama, either. The same care was given to Michelle’s image.

A Pulitzer Prize-winning journalist was ousted from an event with Michelle Obama in March of this year for violating the ‘Black Girl Code’.

And when there were tough questions about the direction that the administration was heading, conservative reporters were tossed out.

Like the time Adam Kredo, a Washington Free Beacon reporter, was kicked out of a State Department media briefing in Vienna. Senior State Department officials even threatened to call security on him. Apparently, they were concerned about the coverage of the Obama administration’s negotiations which led to the Iran Deal. 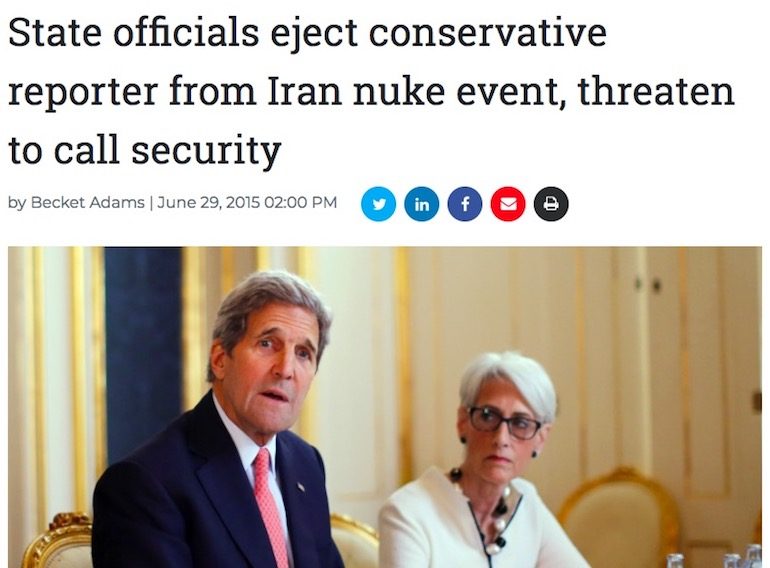 It’s become cliché to say it, but it’s true:

This is how you got President Donald J. Trump.