The activist leftists are turning on each other. Here’s the 411.

A few weeks ago in London, eight lesbians made headlines for jumping to the front of the Pride parade and protesting anti-lesbian hate and sexism within the LGBTQ+ movement.

The rest of the GBTQ+ have lost their minds over it saying that the act itself was an ‘invalidation’ of transwomen.

The key point that the women were trying to make was their opposition to changes in the U.K.’s Gender Recognition Act which would no longer require a medical diagnosis to change an individual’s legal documents to conceal their birth sex. This would mean that individuals born male could choose to identify as female without any medical intervention, and would be permitted into ‘women only’ facilities such as prisons, domestic violence shelters, etc.

Natasha Chart wrote an article for The Federalist that chronicled the threats and actual violence that has been increasing against women that disagree with the new transgender ideology. She also wrote about her own harassment by a transgender pornographer.

Here’s a snippet from her article:

Women criticizing this gender identity policy have been accused for many years of being puppets of religious conservatives, an accusation newly revived, even as it has passed beneath comment that its UK fortunes now depend on a good, working relationship with Britain’s Tory Party, and their conservative prime minister.

Women have raised concerns in meetings across the UK about how this would affect all single-sex accommodations, including prisons, domestic violence refuges, women-only recreational facilities, homeless shelters, and the privacy and safety of female patients in some medical settings. Gender activists say it’s “violent” to voice these concerns, and to say aloud that male people can’t be women.

Attendees and speakers at these meetings have been intimidated, assaulted, had their employment threatened, been kicked offof their political party rolls, been subjected to police inquest and disciplinary hearings for making statements of biological fact, and had a recent bomb threatmade against one of their meetings. The “violence” of women’s recognition of biological sex is invoked to excuse this as a “proportionate response” from transgender people.

There is a movement that some lesbian women are opposing, which is that lesbians must treat transwomen as lesbians in their personal relationships even if they still have male genitalia, because ‘genital preferences are transphobic’.

Isn’t it the genital preference that defines lesbianism?

There are some non-lesbian radical feminists that have vehemently disagreed with the transgender position that biological men can identify as women. Second-wave feminist icon, Germaine Greer, author of The Female Eunuch, has taken heat for saying that ‘transgender women are not women’. Gloria Steinem has said that people have the right to define themselves, but that people are ‘surgically mutilating their bodies’ in order to conform to gender roles that are tied to anatomy. Another academic, the ‘anti-feminist feminist’, Camille Paglia has criticized the lack of biological study in gender and women’s studies programs. Paglia, who wrote a book on androgeny, has never denied the biological differences between men and women. She also identifies as transgender but is concerned about the ‘transgender wave’ that is building in society.

These women, and others like them, have been labeled ‘TERFs’ which stands for ‘Trans Exclusionary Radical Feminists’. Among some trans activists, there is a growing call for violence against TERFs.

Activists say that it’s fine to respond to the words with violence because the words themselves are violence.

Here’s a sample of what’s out there:

If “TERF” is a slur used to silence women then why do they literally never shut the fuck up.

The humanity of trans people is nonnegotiable. So get the hell out of my mentions with your “TERF is a slur” nonsense. 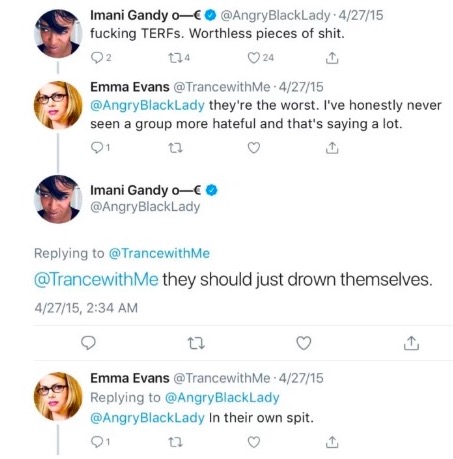 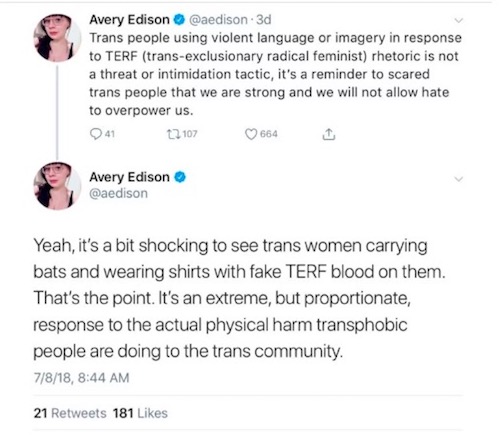 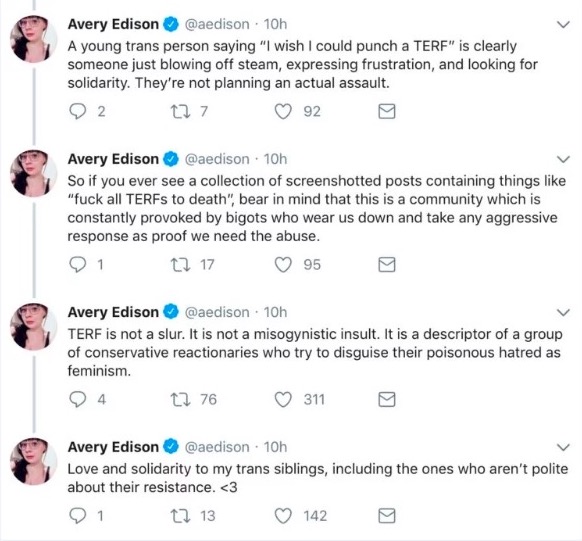 Women are now being exposed to violence for affirming biology and questioning gender theory and the repercussions the activist agenda has on public policy.

Here is Natasha Chart’s list of what has been happening to those that question the transgender activist agenda:

Meanwhile, she also cites that these things have been happening in public:

It’s getting harder and harder to square that circle that the identity politics crowd is pushing.