The shale oil boom in Texas is shaking up the global market… can you say, MAGA?

As technology has rapidly advanced in fracking, the profitability of shale oil has improved dramatically. It is now profitable at $40 per barrel.

This is a huge step towards energy independence and has completely altered the global energy market.

What would it be like to not have to rely on oil imports from the Middle East?

Plunging drilling costs have sparked an explosion of production out of the Permian Basin of West Texas. In fact, Texas is pumping so much oil that it will surpass OPEC members Iran and Iraq next year, HSBC predicted in a recent report.

If it were a country, Texas would be the world’s No. 3 oil producer, behind only Russia and Saudi Arabia, the investment bank said.

“It’s remarkable. The Permian is nothing less than a blessing for the global economy,” said Bob McNally, president of Rapidan Energy Group, a consulting firm. 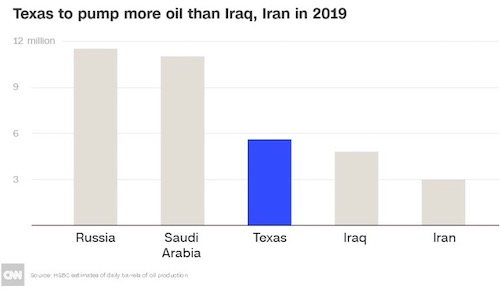 The news is a blessing as oil prices have increased sharply and some major players like Saudi Arabia are maxing out their production.

The rise of Texas, which is also home to the Eagle Ford oilfield in the state’s south, shows how the shale oil revolution has reshaped the global energy landscape. The United States is pumping more oil than ever before, making it less reliant on the turbulent Middle East for imports.

“It’s not going to make the world peaceful, but it will make it less volatile,” said McNally, a former White House official.

“A gentleman from Nacogdoches, in Texas, informs us, that, whilst there, he dined in public with Col. Crockett, who had just arrived from Tennessee. The old bear-hunter, on being toasted, made a speech to the Texians, replete with his usual dry humor. He began nearly in this style: “I am told, gentlemen, that, when a stranger, like myself, arrives among you, the first inquiry is – what brought you here? To satisfy your curiosity at once to myself, I will tell you all about it. I was, for some years, a member of congress. In my last canvass, I told the people of my district, that, if they saw fit to re-elect me, I would serve them as faithfully as I had done; but, if not, they might go to h__, and I would go to Texas. I was beaten, gentlemen, and here I am.” The roar of applause was like a thunder-burst.[Louisville Journal.]