The same people who object to ‘slut-shaming’ have no problem piling on a couple for living by their own morality.

The video answers the question: “Was your wedding night awkward as a virgin?”

It was shown in response to a question from someone who was told that her ‘wedding night will be more painful than beautiful’, and was (naturally) worried about that.

Spoiler — ‘awkward’ wasn’t a word she uses to describe her wedding night.

The words she used were ‘Loved. Safe. Free.’

Here’s some of the negative feedback: 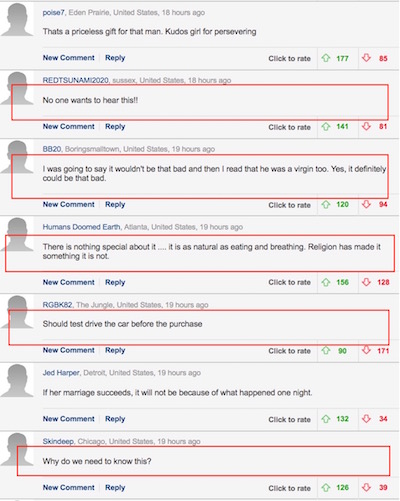 First, she turns a familiar leftist argument on it’s head. Remember that argument that only women could have an opinion about abortion? That’s a flawed objection.

They have no useful information to add to the conversation. Full-stop. End of story.

Because this is a conversation about the experience of losing virginity on the wedding night.

The context is entirely different from bumping uglies, for example, in your dad’s car on prom night. Or whatever other ‘first-time’ context that has nothing to do with marriage.

It’s a whole other ball-game.

Physically, the act is the same. But in every other respect… after marriage, everything is different AFTER a public vow.

And since the emotional state is very closely the working of the female anatomy, these are not unimportant distinctions.

She had NO Reservations. No self-doubt. No worries about regret. No ‘will he respect me in the morning’ concerns.

Can everyone else say that was their experience?

She has a bunch of other stuff to say, too.

Including “don’t thing of sex as ‘dirty’ when it isn’t.”