The Trump Derangement Syndrome is running rampant on the Democrat side of the aisle. Here’s one particularly bad case.

It’s difficult to find the worst cases of Trump Derangement Syndrome (TDS), after all, there are just so many of them.

Sen. Chuck Schumer (D-NY) has committed to opposing the appointment of Judge Brett Kavanaugh to the Supreme Court because the person that selected him was Donald J. Trump.

“I will oppose him with everything I’ve got.” — @SenSchumer on Brett Kavanaugh nominated to the Supreme Court pic.twitter.com/GcTPYNT7RW

Rep. Maxine Waters (D-CA) has become some sort of folk-hero on the left for her knee-jerk partisan opposition.

There is talk that if the Democrats win the House after the midterms, Rep. Nancy Pelosi (D-CA) might become the Speaker of the House, despite her inability to string together a cohesive sentence.

At first blush, it was former CIA director John Brennan that had the worst take on the Trump-Putin Summit and was soundly mocked by Sen. Rand Paul.

This is coming from the guy who voted for the Communist Party USA candidate in 1976. Give me a break https://t.co/0l8X8wiNWA

Brennan’s going to need some Aloe for that burn.

Not to be outdone by the guy that voted for the Communist Party USA, Rep. Steve Cohen (D-TN) had a ‘Hold My Beer’ moment and revealed his advanced case of TDS in the following tweet: 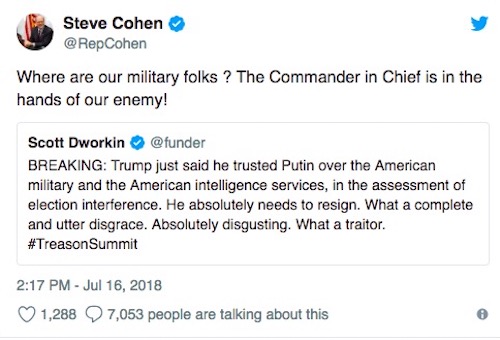 Rep. Cohen responded to MSNBC contributor and #Resistance activist, Scott Dworkin’s tweet with support and called the military to act.

As a sitting Congressman.

Trump and Pence should be removed from office and we should either have a new election, or Hillary Clinton should take over. That’s how we beat Putin. There is no other way. #ImpeachTrump

These people just can’t handle that they lost in 2016, can they?

I know everyone is entitled to be stupid, but these people are idiots on parade.

After Rep. Cohen was called out on his tweet, he backed down and insisted he wasn’t calling for the military to intervene. 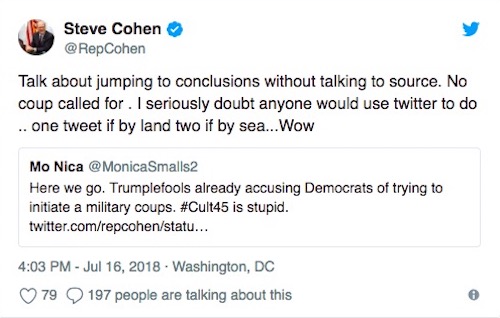 It was an activist movement that caused the overthrow of dictatorships. It was made possible through the use of social media platforms — specifically Twitter.

But hey, what’s Rep. Cohen know about major international news from all the way back in 2011?

Remember, this is the same genius that suggested that Peter Strzok should be given a Purple Heart for — showing up to a Congressional hearing?

Cohen wished that he could give Strzok the Purple Heart — that honor that is given to U.S. servicemembers that are wounded or killed during combat.

I did not realize that #Resistance is the equal to having your leg blown off in combat for the defense of your country and/or your country’s allies.

After he received some backlash from members of the military and some veterans, and is now facing a protest march led by a Purple Heart recipient, Rep. Cohen apologized and walked that back, too. He said that his comments were meant to be metaphorical, not literal.

You know what they really were? Nonsensical.

In other news, it’s nice to see that The Crypt Keeper, unlike his fellow former late night tv star from the 90s, Al Franken, can still sit as an elected official and senselessly preen before the camera. 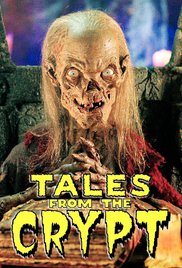 My apologies. With the knee-jerk opposition, it’s difficult to tell the difference these days, and this particular resemblance is uncanny.

Well, that’s too bad that Crypty is unemployed — he was always a much better comedian than Franken. And obviously has quite a bit more wisdom than Rep. Steve Cohen.

Speaking of Cohen, the good MAGA people of Tennessee can his employment situation soon enough.